THIS IS YOUR STORY.  It is not about you, except in the way that every story we tell is about us.

Six months ago, one of the civilian employees at the Space Operations Command in Dahlgren, Virginia detected signs of early failure in a communications satellite in geosynchronous orbit.  The employee phoned her supervisor, who phoned his supervisor, who phoned his supervisor.  An official recommendation to move the satellite into graveyard orbit was ignored due to budgetary constraints.  When the employee who discovered the failure protested the decision, her supervisor threatened her with administrative leave.

The scientists at the base in Virginia modeled possible descents and formed a consensus that the satellite, approximately the size of a chest of drawers, posed no threat to national security or to the lives of American citizens.  A government spokesman offered a brief explanation of the predicted event in a press release issued just after three on a Friday afternoon, using the word “notification” in lieu of “warning.”  Most media outlets ignored the report altogether.  One local station sandwiched the story between the weekend’s professional football predictions and a piece about a viral video of a dog that can howl Beethoven’s Fifth Symphony.

On Monday morning, just before ten o’clock eastern time, model number 29947 began its descent from the exosphere, 650 kilometers above the earth.  By the time the object entered the mesosphere, a mere 80 kilometers from the ground, it was on fire.  It broke apart, into pieces that looked like the tongues of flame in the stained glass windows of Catholic churches.  Most of the debris was vaporized during the free fall, but one shard survived the initial burn and streaked toward the East Coast.  The fireball, an object no larger than a man’s head but trailing hell with it, raced toward the western shore of the Hudson River, where it struck an abandoned lot on the northeastern edge of Jersey City, twenty yards from a school playground.  The impact destroyed a smooth stone that was partially packed into the earth.  Dirt and sand, scalding from the impact, sprayed up and out from the crater, leaving a coffee-colored imprint on the brick façade of an adjacent complex where construction is nearly complete on loft apartments that will soon be available from the mid-$700,000s.  A pillar of black smoke plumed up toward the second floor of the complex’s three-story parking deck before being caught by the wind and carried across the Hudson, where it dissipated just before it could reach the shore of lower Manhattan.  No one was harmed.

This story is one that you have painstakingly synthesized yourself.  You went to college in Virginia with a man whose best friend is married to the female civilian employee at Space Operations Command.  You watched the Friday newscast.  From your office window, you saw the object fall from the sky and strike the abandoned lot on Monday morning.

You tell this story to anyone who will listen, beginning with your wife.  She says, Thank God it didn’t hit the playground.  Thank God no kids were hurt.  Then she says, The apartments start in the mid-$700,000s?  That’s an awful lot of money, even if the neighborhood is gentrified.

Your father gripes about the fact that the satellite crashed long before it was due to fail.  Imagine the cost to replace the damn thing, he says.  When did Americans forget how to build something that lasts?

Your brother works at the State Department of Health.  He says that the way the civilian employee was treated is par for the course.  He tells you that he has been threatened with administrative leave on three occasions.  He asks you not to mention this to your father.

You tell this story to a friend who has read extensively on the internet about America’s disaster preparedness efforts.  He rails against the bureaucracy’s unwillingness to listen to an employee, anticipate a worst-case scenario, and act accordingly.  This kind of shit happens all the time, he says.

Another friend tells you that it just reinforces the randomness of everything.  Maybe a slightly smaller or larger piece of satellite, maybe a few minutes earlier or later, maybe a different weather pattern that day and, boom, dead kids scattered all over the playground.  Little melted backpacks and exploded juice boxes everywhere.  He laughs a little as he says this.

The couple down the block is intrigued by the religious imagery of the tongues of flame.  The wife thinks that you have a way with words.  She wants to know if you would like more coffee.  The husband is the deacon of your church and mentions that he has not seen you at mass lately.  He wants to know if everything is all right at home.

The woman in the office next to yours asks if you know which viral video of a dog barking Beethoven’s Fifth Symphony was mentioned on the newscast.  There are two, she tells you, and one is basically just a rip-off of the other.

You tell this story so often that people have a three-stage reaction to you:  first, they smirk and laugh; then, they groan and grumble; finally, they avoid you altogether.  Spent of fuel, they detach and fall away.  Weeks pass and, over dinner one night, you once again recite the story to your wife.  She quietly lowers her fork to her plate.  I don’t know what you want me to say, she says.  She rises from the table.  You finish your chicken in silence.

Everything reminds you of your story.  When you spill salt on the black range, you see a nocturnal starfield dotted with failing satellites.  When you drive on Main Street, you know that there are machines above you that are the same size as the school bus that lumbers ahead of you.

When you can no longer take it, when the despair orbiting your head is too much to bear, when the earthward pull of gravity is simply too strong, you ask your wife to tell you what it all means.  Maybe you should see someone, she says.  You need to come back to earth.  But it’s too late.  You are at the bedroom window in the middle of the night.  You are looking up at the sky.  You are already in re-entry. 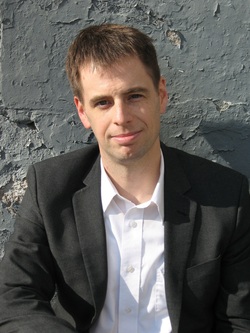 Brian Ross lives with his wife in Hoboken, New Jersey.  You can find his fiction and humor pieces at brianrross.com.