When I was a baby the doctor plucked me straight off the vine. He was careful not to squeeze too hard. My head was a fuzzy brown kiwi, scented ripe and perfect for my mommy to breathe in through her nose. She wanted to call me Kiwi, but my daddy insisted on Plum—no daughter of his would be named after a fruit with hair. He learned to love me when I got bigger and all my brown hair fell out. I was the pliable beige cueball of his paternal dreams and we shared weeks of beautiful balddays until all my hair grew back, black, and thicker than ever.

When I learned how to think I tried to listen to everything my dad said; he was the smartest person I’d ever met. I’d press my ear against the wall between our bedrooms and listen to him try to help my mom,

“Honey, your hair is out of control. Please, I’ll pay for you to go the salon.”

A door slammed and I could only hear her angrywhisper before he talked again,

“Just trim off a few inches, I’m not asking for much.”

My mom was so dumb, she didn’t know that he was just trying to make her better. It’s simple, really—the more hair you have, the more places that the bugs can hide.

By the time I started first grade, my hair was as long as a ruler. I wanted to wear it shorter, but my mom said I was too young for short hair. I figured that if I could stop it from growing any longer, I could be okay. Before my parents came home from work, I would go to the bathroom and take out my ruler and measure my hair. If it fell past the little 12, I would steal my dad’s grownup scissors and cut it to match the line. No one noticed until I made a mistake and tried to cut up to the little 11. I guess it wasn’t a mistake, I did it on purpose. We had a family meeting about haircuts and scissors and mom yelled about how this was dad’s fault and now I have ugly hair. After she ran upstairs dad told me that I was a good girl, and he’d take me to get a real haircut at the salon.

In middle school, I wore my hair to my ears even though mom told me I looked like Ellen DeGeneres. Dad said I looked beautiful and he took us all out to dinner. It was one of the best nights of my life. Mom wore her baldcap and she looked stunning (even though you could still see the bulges of her hair beneath the baldcap’s thin plastic skin). It was the thought that counted. No one even talked about hair that night, it was just like we were a normal family. Mom and dad held hands under the table and asked me about soccer tryouts. We shared dessert. I wish I could carve out a hole in spacetime continuum and bury myself beneath that table. I could spend eternity in suspension, floating forever in the diner where my parents could feel love.

What sucks about dessert and baldcaps and time is that it’s all temporary. When we came home from dinner, mom took off the baldcap and her hair hit the floor. It had gotten so long that it moved behind her like a heavy cloak, a torrent of sable gathering dust in her wake. She’s so selfish, she made dad cry.

"Everything could be so easy if you would just cut your fucking hair.”

Now she’s crying too, but when she cries it’s babyish. She’s not noble like dad, whose tears are heavy with the weight of principle. She cries because she’s stupid. Because she doesn’t know how to use her words. I didn’t want to be stupid like her. I didn’t want to be a greedy and selfish mute who can’t be bothered to do something as simple and easy as cutting my hair. So I went to the bathroom and grabbed dad’s clippers and watched my hair fall to the floor, finally freed from my head. I emerged as a shorn lamb and mother howled at dad,

“Look at what you’ve done.”

Mother didn’t talk to me much after that, but dad was still my friend; we stayed up late on Saturday nights watching V for Vendetta. We rewinded the same scene over and over and over again, the one where Natalie Portman is shorn against her will. It was sad and all, but she looked so beautiful despite her pain. She was pure, vulnerable, delicate; everything that a girl ought to be.

When I got older, I spent less Saturdays with dad and more Saturdays with boys who also liked my bald head. A lot more boys are into shaved heads than you would think and even though all these boys were different on the outside (punks, bros, poets, you name it), they all liked me for what I didn’t have inside. Sure, they liked that I had no hair on my head, but they also liked how small I could make myself in a chair and how I long I could hold my breath underneath the surface of a conversation. They liked that when they reached for the stubble on my scalp I didn’t cry out, that instead I just grabbed a razor and I fixed it. I fixed myself. I was a self-contained machine.

I never anticipated how things would change when I took the razor to my eyebrows. I was just following logical progression, folding my body into the same little box I had folded into a thousand times before. The bristles of my brows seemed just as loud and errant as all the other hairs on my head—how was I supposed to know that I needed them to be beautiful? The boys started telling me that I was acting weird, but they also stopped holding my shoulders down and telling me how to breathe. I remembered the desire in their eyes when I only took the buzzer to my scalp. I remembered it because now they flinched when my hand lingered too long on a pair of scissors or a razor or even a nail-clipper. There’s a special magic to uncovering the threshold of appropriate hairlessness, and each incantation I cast cuts another set of strings.

Although I was newly untethered, I still had to go home; the boys would no longer have me. Mother hadn’t looked at me in years but now father struggled to hold his gaze on my naked browbone—I could see the gears turning behind his eyes, at least she still doesn’t have hair on her head. That wasn’t going to work for me. He was just like the boys, or rather the boys were just like him (and neither of them deserved to possess any part of me). I went to the bathroom and grabbed a pair of tweezers and plucked out my eyelashes one-by-one, watching them float down toward the sink like dandelionpuffs. Anyone could now see the smoldering red holes where my eyelashes used to be. I lifted the tip of my nose with my finger and flared my nostrils so that I could pull out all the cilia too—they kinda looked like hair, and that was enough. When I walked out of the bathroom this time, silence fell over everything; neither mother nor father could bear the sight of me.

I left the house and went out onto the street. Everywhere I went, people looked away. They looked at their shoes, their phones, the sky—they stared at anything other than my red, naked face. When social convention necessitated, they spoke to me, but they limited their voices to hushed tones. Like I was a baby, like a loud noise would break me. A few brave passerbys dared to look me in my angry bald eyes, and I think it was the sympathy that you afford the dying. As if to say, “I still see you.” As if to say, “I’m not afraid that you’ll infect me.”
​
But that’s not what I wanted. I didn’t want to be treated with fleshy sensibilities like pity or empathy—I wanted to be seen like a car crash. If you stare at me too long, you’re a bad person. Move. Be scared. I have an invisible-visible forcefield. Pretend you can’t see me while you get out of my way. 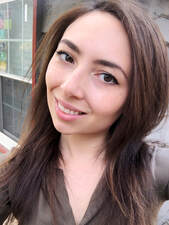 Emily Trachtenberg received a B.A. in Literature and Writing from William Paterson University.  She is currently a graduate student living in New York City with her boyfriend and two cats. In her spare time, Emily can be found either avoiding pigeons or writing short fiction.