How I Met My Wife

And then someone will say, they want to introduce me to a new man on the team, or we’re heading out to a job someplace, they’ll say, Hey guys, this here Mike. Cool as you like Mike, we call him. Or we’re over to Twin Peaks off I-10 a Friday afternoon, sitting out on the patio in front of the weekend, half naked gals coming round with frosty mugs of beer, and someone will walk in and shout, overly loud, Hey, there he is! Cool as you like Mike. How ya doing! This here the guy I was telling you about, slapping shoulders and handing out headlocks. This is him. Met his wife, his buddy died. No, sorry. Other way round, right Mike? Guy’s dead, you walk off with his girlfriend. I’m kidding! Come on! I’m messing with you! Stop it. And then it’s whispering, halfway not whispering. Steve McQ. Who? That was his name. Steve the talker. No, not stalker. Talker. Could never shut him up, right? Mike shut him up. What was it, Mike, Chinese food? Pizzas? I mean all up the front of the bus. City bus. Driver’s still in therapy, what I heard. Wipers mushing everything, blood and brains and springrolls, up on the glass. Seriously! Ham and pineapple. All kinda cheese.

Cool as you like Mike. What we call him ever since. She was on the bus, right Mike? Come down off the bus? Sees his buddy get schmucked, but then sees this gal, she’s in some kinda distress after what happened, walks across and comforts her and they fall in love. Buddy bleeding out in the road, head all broke, and Mike’s copping a feel. Huh? Cool as you like Mike.

I was in the diner across the street. I was waiting on a burger take out. Columbia Road, off the expressway, north end of Dorchester. I didn’t want roti. What is roti? Plus the place was jammed. All it was, it was a house full of deep fryers. And was a line a half a block on the sidewalk, in the pouring rain. But Steve was dead set. Got to be good right! I mean, they’re standing out in the rain tells you something, you know it must be some good eating! Wait until you try this! This is going be amazing. Everything with Steve was amazing. And everything he said, if wasn’t an outright fabrication, was enhanced in some way, an exaggeration. What is it? It’s roti man! You never had roti? Jesus! And then, because it’s Steve, we’re going to have to sit in the car to eat so that he can see how much I’m going to like it. Told you I know what to look for. Didn’t I? It’s good huh? Better than any Subway sandwich shit for sure. After this we’ll go for beer. Couple days all we got left my friend before we go back home. I know a couple places, get in some trouble. I was always happy, though, the whole time we were working up there, to swing by Lambert’s Market, get something out of the deli. And sure, Subway. It was easy, it was right outside the site gate for God’s sake. But he always was ragging on me to try something different. Something only he knew about. We spent an entire afternoon one time looking for some kind of famous barbeque place in Dorchester. I mean, up and down and round and back and through all of those steep, twisty, gloomy streets and lanes and alleys.

He wasn’t my friend. I didn’t hardly know him. We had to park three blocks away and walk back in the rain to get in the line. Pulled my hoodie up over my head and looked around and saw the burger place across the street. I’ll be over there, I said, pointing, and stepped off the sidewalk, walked out through the traffic, dodging this way and that, just to get away from him and get out of the rain. Hey! Where you going? Get back here! Stepped off the sidewalk just a little ways up from where he did the same thing with his roti, twenty minutes later. Hey! You don’t know what you’re missing! Lifted my hand over my head, gave him a backwards wave. I ordered a burger and fries to go and sat down at a table by the window to wait, dripping everywhere and shivering all through. And she was in there. She sat down beside me, waiting as well. We got to talking. We swapped numbers and agreed to meet for a drink the next day. That was it. We both heard the horns and the screeching brakes. I turned my head and I could see, through the rain streaming on the window, the bus lurch and stop, twisted to the side and rocking back and forth, folks inside, in its light, already standing, leaning forward. He wasn’t my buddy.
​
Or we go someplace in the family. Kalie’s from up in Maine but she has family all round the northeast and down as far as Atlanta, so there’s always someone new shows up for dinner, for a birthday, Christmas and the rest. Hey, hi there! You must be Michael. It’s so nice to meet you at last and I’m so happy for Kalie! Sure, I’ll take some sweet potatoes. So tell me kids, how did you two meet? How’d y’all get together? And sure, it’s easy enough to leave out the part you don’t want to talk about. But it’s still in there isn’t it? Hanging, like he’s hanging in my head, mid-step, airborne between the sidewalk and the front of the bus. I’m stuck with him now. As long as I’m with my wife, he’s with us. And he wasn’t my friend.
Copyright © September 2022 Mark Cassidy 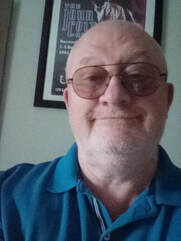 Mark Cassidy was born in the UK, emigrated to Canada, living at present in Texas.