from Still Places to Go

She makes an episodic turn, and feels a contextless universe is inevitable. She strives to negotiate a plan but falls back from the rumors of a weary council. I try to facilitate her nerves by making her the endpoint of all nightly paragraphs. A closing in of a tunnel reversed by light.  Yet this theory is also blind to the dynamics that influence its object. This loss of historical narratives, political legitimation, artistic mastery, and so on.

Felt the rawness with the big cee. When people were marching in a baroque paradigm, the colors were excruciatingly bright. Like the realness of my god given name. I was born with historical models already in place. Significant ventriloquists under the gaze. The third idea I had: to represent this by reproducing it via an image. Not that I have time. I mean I already sweated through two tank tops. And my arms can't move. Bangles embrace them from the wrists.

Ebb at the visit of the Velazquez paintings. From local frowning to courtly prestige. Managed to make her model around the scene and draw on its architecture. Valance and the entrance of sexual stereotypes. Put the glass cauldron down and beat just a stone bloody. When the appropriation’s accrual is flourishing, the swirling of a critical montage defeats me. I feel relegated to myth, or reconstituted by such. She perhaps, is my only exit.

As much as I hate the word unique I am floored by its temperance. Scaled large motifs in cynical jest to claim that lack of appreciation. A diagram doesn't need a recital. It can be acted out in the moment of things. When one brings you the coffee and serves you the eggs. If I father such an idea of a woman am I moving through space at a different rate? I think baseball has inverted the speed of light brought to us by a simple law. A law suggests that we are well aware of its intricacies. 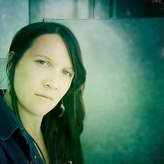 Paige Taggart has authored three chapbooks: DIGITAL MACRAMÉ (Poor Claudia), Polaroid Parade (Greying Ghost Press), and The Ice Poems (DoubleCross Press). Additional publications and her jewelry can be found here: mactaggartjewelry.com, ad hoc she curates Bling That Sings, a site that promotes beauty and poetry. She also administers the tumblr, Poets Touching Trees. While her origins are Northern Californian, she currently makes a home in Brooklyn with her bf Sampson Starkweather.