ALEXANDRA RENWICK
​
The Life of an Artifact in Duodecadal Glances

Chapter 1, and she is twelve:
Of Things
​
Your mother's trunk of your grandmother's things (with which you're not allowed to play) sparks one hazy lazy rafter-spelunking afternoon a dusty nostalgia for the woman you barely knew. Close your eyes, breathe attic motes, and try to reconcile . . . warm lilac folds of powdered neck with looping strands of painted pearls. Weep-willow spine and birdwing shoulders with buttermilk gown of bias satin. Hands mapped with blue vein rivers, arthritic topography curled and burled, with two flaccid kid-soft tubes of buttoned leather.

These last you can't resist. Tug them over sunburnt arms (it's summer; you're twelve) and feel the ghost of her inside, where your fingers wiggle.
​
Another year and they won't fit you at all.


Chapter 2, and she is twenty-four:
Intermittent Use

Lying like satin snakes in the back of her lingerie drawer are the gloves she onetime sometime bought. Reaching for other silked laced delicate things on a thousand other occasions she has grazed their edges with her questing hand. But even hankies get more play. Even slips. Even hair ribbons, for fuck's sake, get dragged out on occasion past the empty fingers twined like a nest of asps with silver sheen.

Why does she keep them? What are they for? A costume to titillate. To stay up late. To drink champagne in gloves. For ritual, for her mother's sake, to eat wedding cake in gloves. Smelling of lavender parchment and brittle tissue, once put away they never fade, are never worn, are only lingering memories of that one time when.


Chapter 3, and she is thirty-six:
Pair

Gloves are my doctor's Supersuit, assisting with her Superpower as she is my Superhero.

My son, when he slides from our private universe into this public one of light and noise and cold, meets first of all things in this world those gloves, a pair nothing like the empty five-fingered sheaths deep-sleeping at the back of my lingerie drawer.


Chapter 4, and she is forty-eight:
Myopia

Funny to know these vintage gloves you bought from a yard sale a million years ago are older than yourself. It's nothing shy of astounding you can still force your fingers of each hand — the right; the left — into the five corresponding floppy tunnels scented like dead flowers you've never seen and powder you've never worn. It's how many years now you've been on your own? But a rare excursion to the symphony calls for some fanfare, no denying that. Getting dressed up for the first time in too long, it's hard not to shudder at the sensual slip of satin over skin. It's true your recent habit is to avert your eyes from well-lit mirrors, or let your vision glaze over in happy forgetfulness to look. But your flesh isn't that loose, is it? It hasn't forgotten that much, has it? No. You smooth too-dark lipstick over hairline puckers you don't remember having, deliberately not wearing your glasses because your face in soft focus looks more like you than it does when you put them on and can see.


Chapter 5, and she is sixty:
In Sunlight

There's an exquisite pleasure in communing with bees. That's how I think of gardening as I watch the slow bumble of a black and yellow fuzzpot in his swollen pollen jodhpurs amble in and out of crimson-petaled cups I planted for exactly this. Yes, the blueberries and tomatoes are good to have, and the rosemary and lemon balm and fennel don't need my help (some days you'd think they'd been taking lessons from kudzu, the bane of my mother's garden and the backdrop of a southern childhood two thousand miles from here).

Knees hurt too much to continue. Enough for one day. Have to open the shop tomorrow, early. Should toss these gardening gloves in the wash. Must check to see if my son has called, search for his number in the phone log, because he doesn't always leave a message even though I always look.


Chapter 6, and she is seventy-two:
Altered to Fit

Run a vintage shop for fifty years until you outdate your wares. The flesh parade through your place grows younger every year (not you older). Bodies over time appear more lithe, more supple and more free than you remember ever feeling. This becomes truer with each year that passes — no, each month.
​
Fashions come and go and come again, an elusive orgasm of catering to the perceived desires of the young. Younger, younger, younger until you no longer recognize your customers as similarly-specied to yourself. Young women — difficult to think of them as full-formed human beings, though many look older than you did on your shop's opening day — young women have grown too tall for the clothing of your youth. You study them from among your racks and shelves of foundation garments, glass slipper footwear, and stretchless materials for which they've grown too lithe, too tall, too broad, and too unfettered.

Still, they sometimes buy clothing your age and worse. An antique dress which fits they think an oddity, an affectation, a joke. Accessories are more popular; a purse never grows too small with decades, if anything it grows too large. Indispensables and unmentionables of the modern girl have become minuscule: the tampon, the cell phone, the credit card, less bulky than their predecessors the journal, the pocketbook, the sanitary napkin. Already you glimpse a future — a near one, though maybe not near enough for you to see, in which those things will be replaced with the even smaller injection, the wireless wedding band, the implanted credit chip tiny as a grain of rice or the head of a sewing pin. Will they ever have seen a sewing pin? Outside your store, when was the last time you did?
​
Only lipstick remains the same. Lipstick and gloves. What about gloves has altered in a hundred years other than the length of fingers? Snip off the ends and they, like you, fit into modern sensibilities, anachronistic. 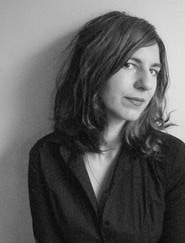 Alexandra Renwick's short works have appeared in Mslexia, Nautilus, Little Patuxent Review, and Make/shift Magazine. Her fabulist/surrealist collection PUSH OF THE SKY (as Camille Alexa) received a starred review in Publishers Weekly and was a Powell's Books Portland book club reading selection. Born in the west and raised in the south, she currently lives in the north in a crumbling urban castle with a leaky pond and six voracious fantailed koi. More at alexcrenwick.com.