You Never Wish That Upon Anyone

You never wish that upon anyone, until you wish that upon anyone who is not you; who is not you and is not your son. Until your son is lying in a hospital gown and he can’t tie the back up and the back of your son is exposed and he’s just sitting there, with bare little arms and legs and toes and he doesn’t want to take off his underpants, but the doctor says— Do I have to take them off, Mommy? Mommy, please. I don’t want to. Let’s go home.

At home his stethoscope is bright red. It came with a tiny white coat that said Junior Doctor on the breast pocket. Last week you bickered about Halloween candy, miniature plastic-wrapped chocolate bars. How could your son have just been playing pretend and now be lying in his very own gurney? Journey, your son says. This is not like the journey those boys took in the story: there are no boats, no fish, no adventures. It is a gurney, you say. He says: I don’t like either of them. Let’s go home now.

You do not say anything.

Why don’t we sleep on it, your son says. Which is a thing you’ve said to your son for years, which is a thing your husband said to you for years, but then he left one day and did not return. We’ll decide in the morning, your son says. No sense in getting ahead of ourselves. This too he repeats with exactness. But then it is like your son hears you. It’s always felt like your son can sense the things inside you. He says: Maybe Daddy has the answer. Maybe we should phone him. Maybe he will know what to do. You love your son for many reasons, but right now it is because of his affinity for that word: Maybe. You understand the faulty hope of it: the uncertainty, the fragility.

We can’t phone Daddy, you say, Where he is there aren’t any phones. But this is a lie because you have phoned him, you’ve phoned and left voicemails and sent text messages and said: This is your son. Do you remember? He is a piece of me and I know you have erased that part, but he is also a piece of you and you love you, don’t you? You are the only thing that you love.

My tiny brave boy, you are confused.

Why don’t we sleep on it? He says.

You walk to the waiting room when his breathing normalizes and he shuts his eyes. You walk to the waiting room because in there you do not have a terminal child, in there maybe you have a child with a virus, maybe you have a child with a stomach bug, maybe you have a child with a broken bone. In the waiting room you pour coffee out of a big metal pot and into a paper cup. You hold the paper cup with both hands. You blow on the top. You meet a woman who is also getting coffee. You do not know who she is waiting for. Around her neck there is a chain with a small gold ballet slipper. Along her cheeks there are black flecks of old mascara. She looks like she has been here a while. You think you probably look similar. You imagine it is her daughter and it is the flu. You imagine it is her niece and it is the chicken pox. You imagine it is her neighbor’s child and it is a fever. You do not imagine it is the same as you.

Over the sound system there is a noise like a tiny siren. You take a sip of your coffee. A muffled voice says: code blue, code blue. You do not know what this means. Your son’s favorite color oscillates between red and blue. You tell the woman this. The woman stares back at you. A nurse enters the waiting room. She walks towards the two of you.

You look at the ballet slipper. You think of your son’s tiny toes.

The nurse opens her mouth.

That is not a thing you wish upon anyone. 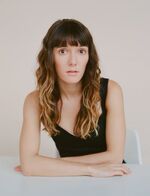 Jenessa Abrams is a Norman Mailer Fiction Fellow and has been awarded fellowships and grants from the MacDowell Colony, the Ucross Foundation, the Vermont Studio Center and Columbia University, where she earned her MFA in fiction and literary translation. Her writing has been nominated for a Pushcart Prize and published in Tin House, Guernica, The Rumpus, BOMB Magazine and elsewhere. She recently received a subsequent graduate degree in Narrative Medicine at Columbia University. Currently, she teaches writing at Rutgers University.