Fame is the thing with feathers.  I'm sure you've met her;
she does that old-time dance behind the boas
and nothing else.  Still young, she's old as feathers,
and like the ancient monuments of Uruk,
she's built to encase herself in fame.
The prostitute is sent to placate Enkidu
among the antelopes, to comfort him
with the soft, civilizing hands of sex.
And now we hold the key, make her, or maybe
keep urging on the expedition.  Humbaba
must die to get the cedar for the doors,
and now the king dies as he sees his love
and fear in his refusal.  Fame lies in laughter,
then watches as the maggot eats the nose. 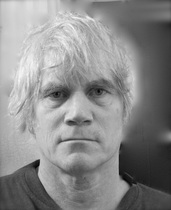 Allan Johnston’s poems have been published in Poetry, Poetry East, Rhino, and over sixty other journals.  He is the author of Tasks of Survival, Departures, and Northport, a collection of poems about his life in the Pacific Northwest in the 1970s, and a recipient of an Illinois Arts Council Fellowship, a Pushcart Prize nomination (2009), and First Prize in the 2010 Outrider Press Literary Anthology Poetry Contest.  He has also received honorable mentions or placed as a finalist in contests featured by New Letters, The Academy of American Poets, Salute to the Arts, and the Roberts Writing Foundation.  Originally from California, he earned his M.A. in Creative Writing and his Ph.D. in English from the University of California, Davis, and now teaches writing and literature at Columbia College and DePaul University in Chicago.  He currently serves as a reader for the Illinois Emerging Poets competition and for Word River, and is editor of the Journal for the Philosophical Study of Education.  In the past he has worked as a sheepherder, shake splitter, roofer, forest fire fighter, Indian cook, and photographer, among other occupations.