What I Did for the Ocean​

At first I offered my car,
but it didn't want it.
Tires tasted stale, windows

cracked.  I said it could have
the whole beach, every grain
of sand.  It refused, told me

it had enough of this dirt.
It also didn't desire hotels,
full of glass and people,

full of empty calories.
The city was last, and it agreed
to swallow it whole.

I stood at a distance, watched
waves surround everyone.
I was supposed to feel guilty,

how all I brought was death.
But what I did I did
for love.  To see how happy

the ocean was, pouring itself
over streets, no longer starved,
no longer wet with envy.

You climb the mountain
because the sky says climb.
Below you is the vibrant city
tossed in electricity,
hammered by every light
in the world.  Around you
is the remnants of a forest
barely able to sustain itself
at the edge of the peak.
You've seen black bears,
antelope, and deer.  You've
named the darkness around
you good, because it lets
stars have their say,
millions at midnight,
unwilling to be counted
by a human mind.  What's
left but to thank the sky.
You thought it didn't know
what it was doing,
that this ascent would kill
you.  But now you measure
everything in the earth
by this sight, and all
fall short of this dark,
the galaxy's crown of light.

Your home was dynamited by cartoon characters.
They didn't stick around to see the flames, or you
rising out of the ruins, your body blackened by
the explosion.  You decided to write ACME

to get revenge, to purchase their most powerful
TNT.  When it was delivered, you rubbed your hands
gleefully, kissing the wicks of the sticks.  You built
a copy of yourself in wood, which would race

on skates to your enemy's stronghold, where
they talked about ratings on the cartoon channel,
plotted their scripts for maximum hilarity.
They didn't realize you weren't fooling around.

Greeting your double, they thought it was harmless,
but then it blew up in their house, set fire
to rabbits and ducks, roasted pigs and frogs.
The channel had to rerun the old adventures.

no one was hurt.  They somberly passed
through cartoon into nothingness, as people
watched something else, the sports stations,
babbling commentators, the news' constant roar.

The sky is raining people again.
Not just any human forms – my family.
My brother hits a flower, spreads

through its petals.  It’s certain he always
wanted to be this lovely, until someone
picks him and eats his sweetness

with her noses.  Mom lands in a fountain,
becoming part of its water, spilling out
in a reservoir.  The flies love her, skidding

on her body like little motorboats.  Dad
falls last, hitting rocks, unable to soak
into anything.  He is pooled at my feet,

and I can stomp on him with my shoe,
so current ripples through him.  He didn’t
remember the time he tried to let me

drown inside him, my arms pushing me out
into a new birth.  I was no longer his,
if I ever was.  Somewhere nearby

my wife was shooting up like wild grass.
I would twine her together, make her
real.  She’d become what I could rest on,

when the bodies stopped falling, under
a moon clean of all relations, except
the soft beauty beneath my skin. 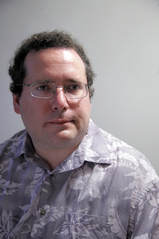 Donald Illich's work has appeared in literary journals such as The Iowa Review, LIT, Nimrod, Passages North, Rattle, and Sixth Finch. He has been nominated for the Pushcart Prize and received a scholarship from the Nebraska Summer Writers Conference. He won Honorable Mention in the Washington Prize book contest and was a “Discovery”/Boston Review 2008 Poetry Contest semifinalist. Gold Wake Press named his full-length manuscript a finalist during their 2015 open reading. He self-published a chapbook, Rocket Children, in 2012, and published another chapbook in 2016, The Art of Dissolving (Finishing Line Press). His full-length manuscript, Chance Bodies, will be published in 2018 by The Word Works. He is a writer-editor who lives and works in Rockville, Maryland.