Many things happened during the summer we said whore for the first time. We heard the word from Barth's dad, smoke erupting from the large hole in his face. We ate his food off plates that had been sitting in the bathroom sink for weeks and repeated the word between mouthfuls of black egg – I can't remember how it came up. Barth sang the word in jingles he remembered from late-night TV and tongued a loose tooth from side to side, another which tasted like sour apple pie (his words). Barth had had many loose teeth, and he always said they tasted of sour apple pie.

The morning before I discovered sex, Barth's last sour apple tooth dropped out. He smiled to show the little hollow pits in his mouth, empty holes his adult teeth had failed to grow in. “Pushing gum on gum feels addictive,” he said. He showed me his cupped palm, his pile of saved teeth inside. Each tooth reminded him of the season it came out; last winter's sour apple dropped from a cold, numb sore so fast he had to cough it back up. He tore a thin, linty tube of glue from behind his pillow and said, “I need your help.”

“Did you get that from the tool shed?”

He smiled. The glue was old and dry, but I did what he said, even though he kept dripping blood and tears onto his clothes.

THE FIRST TIME WE SHOUTED the word on the street, we had no idea what it meant. Barth's dad told us the rule: her skirt must be above the knee, above legs spread too far apart. We walked what Barth's dad said was the freest street in the country and used the word in the direction of orange painted women. Barth did his best, but with all those teeth in his mouth he wasn't making a lot of sense. We turned their attention only for seconds; instead, they smiled at loose standing men who scratched themselves through their pockets.
“I don't feel well,” said Barth.

I handed him two white pills I usually kept for times when Barth complained. He sucked the tablets and contorted his face and swallowed both in a spitball. “No more sour apples,” he said.

Later, we allowed a friend we didn't like to hold our box of cupcakes. Bryan, a boy with shiny hair and shaky hands, said he'd never seen so many cupcakes in his life.

Barth showed his new-old teeth and tried to say, “We sell them,” but Bryan didn't understand and followed us because there was nothing else to do.

Missus Parker gave flowers to those of us with mothers. She told us the names of each type (I remember none of them) and what God made them for: pairings, partings, deaths, and newborns. She had faint yellow ones for afternoon tea when the sun got low and cold in the sky. She had budding, pale green ones, no larger than baby teeth, for our relatives when God scooped them up. Missus Parker tied up her red hair and told Barth it was just fine not to have a mother. “Go home,” she would always say, “and put the flowers in water to stop rot.”

Barth poked me in the ribs, and I asked the question: “Is Mister Parker around?”

Missus Parker told us he was at home because old men need quiet time more often than not.

IT USUALLY TOOK US fifteen minutes to walk from the east side to the west side, and if we got lucky we sold a few cupcakes to people who always seemed to be waiting for us. There were three flavors: chocolate, dark chocolate, and very dark chocolate, the most expensive. Customers would hold the merchandise like a small child, and I would say, “Have a nice day,” even if I didn't mean it. Yes, we talked of pocketing some of the money, but Barth's dad was an excellent counter; he knew exactly how many steps it took – eight hundred and ninety one, he told us – to get from his house to the graveyard for unmarried women.

Mister Parker lived at the side of town where the sand blew into our eyes. Barth held his blood stained jumper over his face till we reached the porch, which had deep cracks with ants peering out. We forced Bryan to rap the knocker, and he did, but only after he'd rubbed his eyes till they were swollen with red water. Barth and I silently decided to blame him for anything blamable. Instead of Mister Parker, a young woman with bright hair stood there, looking ahead and then down. Barth poked me again. Bryan shook and dropped the merchandise, one unlucky cupcake rolling off the porch. The woman spoke so clearly that it seemed the rest of us spoke through Barth’s dad’s TV. “Come,” she said.

The bright woman returned inside, leaving the door enough ajar for us to watch her walk with the most beautiful limp we'd ever seen. Neither Bryan nor I expected Barth to follow her as quickly as he did. We chased him down. I couldn't place the inside smell.

Barth drew mouth-breath. Down the curve of her back you could see her underwear lift up from somewhere deep and open-fire warm. The material was soft, dynamic, heat colored with a black rim that pushed against her waist. She led us to what I think was the kitchen, where the inside smell slept on my tongue. Five men played smoky games at a table too large to swap cards. They all turned and watched Bryan's shaking arms. I didn't want to die. A hairy man with a cigar in his mouth spoke in vomit noises. “Boy. What are you smiling at?” He was speaking directly to Barth, who wasn't smiling but rather showing his new-old teeth. I remember the warmth leaving the room. I remember the cringe I made when Bryan spoke with brave intent. He said his name was Bryan with a Y. He said we were there to sell cupcakes to a Mister Parker.

Bryan checked his feet, looked at me. I didn't want him to die either. He did what he was told and walked through smoke to the man with hair in all places but his eyes. “Do you smoke?” Bryan nodded he didn't. “Me neither,” he said. It felt nighttime-ish, even though it was early afternoon. “Cheryl. Buy something off that young boy.” She pulled me from the smoke, and before the door closed I saw the plenty haired man push a fresh cigar towards Bryan's shut face.

Light emitting Cheryl pushed me into another purposeless room with an old sofa that puffed out dust when I sat down. One hour before the moment it happened, Cheryl knelt down in front of me, looking like a person who enjoyed confrontation. “Tell me. How much?”

My tongue had the weight of a boat paddle. “Two dollars.”

She held a very dark chocolate cupcake, sniffed and moaned. She took a bite. “Try some.”

I wanted to sound masculine, hairy. “We're not supposed to eat the cakes in the box.”

Cheryl pushed out her wet lower lip. “Now, I'm going to be sad. Do you want me to be sad?”

I promised I wouldn't eat the cakes in the box. She touched my face in odd ways. “You're so young to be this defined.” She was strange, but her gestures were not out of character; strange was exactly who she was. “I hated school,” she told me. “They treated me the same way they treated everyone.”

Cheryl smelt the way green flowers do after they rot. She lit a cigarette and blew smoke into my mouth. “Would you like to dance?”

Later, she became sleepy but spirited about teaching me how to change direction. She insisted I hold her firmly, for a woman to know a boy was in charge. She sang slippery words through her nose. I called her a whore, and we stopped dancing. I yelled at her to take her clothes off, and she did, but only after I'd agreed to bite the cupcake, and I did. Our skin grew hot and flushed. Cheryl rolled her eyes and said the ugly wallpaper was moving at the corners. Powder rose from the floorboards where we lay. I was sharp only to the small things, the hair in front of my face. I thought of sleep, but my body kept finding new ways to move. The wood of the floor felt soft on my fingertips, like the skin of Barth's feet when he slept in hospital many weeks later. I work up cold, needing to find my clothes, listening to the sound of Cheryl’s crying.

It was nighttime when the three of us left together. Barth asked for more pills, but I had none. Bryan didn't speak but only coughed from time to time and rubbed his eyes until they looked further set into his head. It was two thousand four hundred steps back into the center of town, and we were around step nine hundred when I noticed Barth had been bleeding from his mouth. He tried to say, “My teeth are still in the house.”

Bryan didn't speak to us again, and we never seen him until school began, where already he looked taller, older.

The day after I discovered sex, I visited the flower shop, holding my mother's hand, and Mister Parker was there, one of the quiet men we had seen sitting at the kitchen table. He mumbled something to Missus Parker about having to leave on an errand, and Missus Parker gave me some pale green flowers for Barth because God had made him sick.

Months later, I returned to the street with the orange painted women. The place was missing that first-time excitement, the people and the color and the heat. I had pills in my pocket in case Barth turned up, but he didn't in the end. The women slipped away into the cracks between buildings. Whores. The word was on my lips, but my tongue was once again heavy and too dry to sound it out. The sun was in my eyes, and I didn't care to look, but I did. I watched a pair of legs walk and stop and glisten, and it was only then, as the wind picked up, when I realized it was time to change direction. 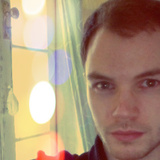 Gareth David Anderson was born and raised in Ireland. He resides in Melbourne, Australia, where he is at work on his first novel and a story collection.