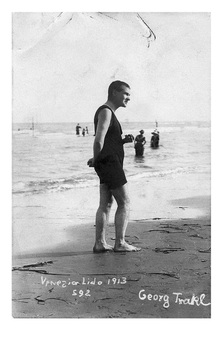 Despite his short life, addiction to drugs and incest, and his enervating depressions, the Austrian Expressionist poet Georg Trakl (b. 1887) produced poems that are as important, beautiful, and fascinating for their range of meanings and his work is now part of the world canon. These verse fragments echo Trakl’s finished poetry—as well as its ductility. They are taken from Our Trakl, a three-volume collection that marks the hundredth anniversary of Trakl’s death in November 1914, when he died of an overdose in a Cracow military hospital. The first volume, Poems, is forthcoming from Seagull Press in 2015.