Plastic Jesus doesn't begin to cover what Carrie has glued to her dash. Plastic Wonder Woman wields a lasso. Bob's Big Boy holds a juicy burger. Monique the Chicken cocks her plastic head above an ancient cassette player and gold Oscar stands erect and poised. Each has a story to tell. Like Carrie.

She's found a parking place in front of Club Sociale. It's a red zone of course but she'll fight the ticket, claiming she's color blind and thought she had 20 minutes. That's about all I can take myself.

Carrie calls her 72 Volvo art wagon, Mona. The years of dust and rust and mud and dried concrete only add to the patina. How you gonna run something like that through a car wash—the rear hatch is covered with decades of bumper stickers. One is from McGovern's failed run against Nixon, but 'ern' is all that remains. Art wagon Mona reminds me of an urn—an urn for plastic toys, ancient wrenches, and rusty saw blades glued to her doors and fenders, with a spoke-less wheel on the roof that spins in the wind when she rolls down the road.

That's pretty much Carrie. How she got her hands on a cellphone to text me I'll never know. But here I am. Twenty years too late.

What we had was once diagnosed as love. How we lived was once called communal. Two-Acre Farm. Just outside the little town we called Sebtopia. A place I don't return to anymore. So why am I here you might ask?

You could call it curiosity.

You could call it obligation.

You could call it penance, perhaps.

Entering the dim club on a bright afternoon, seeing Carrie in her tie-dye cape and peasant blouse wearing amber beads, I'd call it something else.

Two men in 49er caps sit on either side. A bartender dries a glass, looking bemused, Brand E tattooed down her bicep.

Carrie grins when I say, “Hey,” and I see she's down to two teeth in front. Her eyes go straight to my hair, or where my hair used to reside, but she keeps any assessment to herself. Barbers always check out your hair when they greet you, the way Dentists check out your teeth when you smile.

I nod at the two 49er faithful, who, if posture has anything to say, seem less friendly now. They stay in their stools tipping back Buds.

"Oh yeah. You never liked sitting at the bar."

But she's already flowing towards a booth with a view of the street where a cop is writing out her ticket.
"Close the tab?" asks Brand E.

Not much has changed. I order an Anchor Steam and leave money on the bar.

"Headed to Morocco," Carrie tells me. "Taking possession of a schooner."

"Some things are just meant to be," she says with that smile.

"Gonna sail her back?"

"Not in hurricane season." Carrie twirls the stir stick from her daiquiri.

Her dad was a merchant marine; she grew up on a tug in Sausalito. We'd built a bark in the barn with firm intentions to sail south, though plans had a way of blowing off course in those gusty days we called the youth of our adulthood.

I take a sip. The cold 'Steam feels good going down. "So, you gotta crew?"

"Gonna single hand. Wondering if I can leave Mona with you."

"When did you start doing that?" she says. "It's kinda cute."

"No, this." She shrugs and rolls her eyes.

I grin, shrug back. "Don't own a car anymore. Don't want one. I use Uber, Lyft. Sometimes I rent a Zip Car."

"What about your two new friends at the bar? The bros whose drinks I just bought."

Carrie laughs with a heave of her shoulders, a wheeze from her chest. The miles have not been kind.

"How about Candace and Ray?"

"They're gone." She gazes out the window. The new citation flaps in the breeze under a wiper blade. A man in bermuda shorts is taking a picture of a woman in capris posing in front of Mona and I can't decide whether they are time warp tourists or hipsters who've lapped me in the cool department.

We sit at the small table listening to Johnny Hodges. Both of us gray. One of us thin. Neither of us anywhere but here.

"But I am single handing. And where I'm going, I can't take Mona."

I nod. The two unfriendlies have left the Club and Brand E is vaping out front. A crowd gathers near the art car checking out the right rear Ouija board window. One guy spins the spoke-less wheel on the roof as if it’s roulette.

We both know what number it will land on.
​
I reach across the table, rest my hand next to Carrie's, her fingers covered in rings. The Navajo turquoise I recognize from our Peace Corps training in Gallup.

In a heartbeat they say. It's over just like that.

This goodbye I do not want. Not because it'll be our last, at least in this life, but because of what I now must say. And so I do.

"Sure love, leave the keys with me." 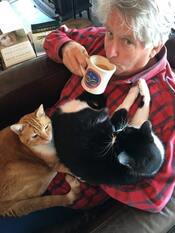 Guy Biederman's work has appeared in Carve, Blue Fifth Review: Blue Five Notebook Series, daCunha, Sea Letter, Medusa's Laugh Press, Flash Frontier, Exposition Review —twice a Flash 405 Contest winner, and many other journals in the U.S., UK, and NZ. One piece in Third Wednesday appeared as both flash fiction and poem of the week. His third collection, Soundings and Fathoms was published in 2018 by Finishing Line Press. Guy has been a Peace Corps volunteer, plastic injection molding machine operator, gardener, sports writer, publisher, and college writing instructor. He and his wife live afloat in a houseboat at the pleasure of two salty cats, and daily walk the planks.