BEAUFORD WAS HOT THAT DAY, but around four o’clock a storm came up and cooled things down some. Debbie Wray walked in from the grocery store with four big bags. It was Darryl Kendrick’s birthday. He was sixty. Needless to say, he’d never been sixty before. He wasn’t sure what to expect.  “Would you like to eat out on the screened-in porch?” she said as she sat the bags down on the granite counter. It was a beautiful place.

“That sound nice,” he said. She smiled at him affectionately. “What’re you fixing?”

“It’s a surprise,” she answered. “You go watch television or read or something while I cook. I don’t want you to see.”

Darryl Kendrick walked over to where she was standing and put his arms around her waist. She had her hair in a ponytail and he leaned over and kissed the back of her neck. It seemed to him that at that moment she flinched just a tiny bit. He tried not to pay any attention to it. Maybe it was just that she wasn’t expecting it. “Did I tell you today just how very fond I am of you?”

“Yes,” she laughed. “I believe you did.” He waited a second expecting for her to say something nice back, but she didn’t. Well, she had her mind on cooking. He grabbed the newspaper and walked out through the French doors onto the porch. He sat down in a wicker lounge chair and put his feet up. He opened the paper to the sports section and acted like he was reading it, but he wasn’t. He couldn’t.  Something was going wrong. He could feel it, and it didn’t feel good at all.
​
He’d driven all the way down from Mount Airy, eight hours. He’d done it at night so the traffic wouldn’t be so bad. He liked to drive at night anyway. He’d gotten to Beauford at five-thirty on Thursday morning. They’d stayed awake until seven talking. “Just let me look at you,” she said as they sat together on the couch. She put her hands on his face and gently touched him. It was as if she was painting a portrait. She was beautiful. He looked into her eyes. They were lovely green eyes the color of the sea. He touched her, her arms and shoulders. She was wearing a white tank top. Her skin was as soft and smooth as butter.

It was the first time that they had seen each other in nearly forty years. They had gone to high school together and reconnected over the internet. They had talked every night for six months on the phone. She had told him that she loved him first, but they had both been saying it to each other for months. Darryl Kendrick meant it and he believed that she did too.

Debbie Wray was a striking woman, as sexy at fifty-seven as she had ever been at seventeen, more so. That first day together everything went right. He’d never had a long distance phone relationship before, but he honestly felt that it was an excellent way to begin things. There was a real sense of honesty about it. Along with that there was trust. He felt as if he knew her much better than he might have otherwise. Perhaps when she said that she loved him what she really meant was that the wanted to or that she expected to. He wondered. Could someone really fall in love over the phone? After all, love doesn’t come apart so easily.

He was sitting with his eyes closed thinking, the sports page open on his lap when she came out. “Are you ready to eat?” she said.

“Well, it will be ready in about ten minutes. All I have to do is add the shrimp.” She looked wonderful in tight white elastic leggings, a soft beige summer sweater, and small gold pineapple earrings. She had taken down the ponytail and her long brown hair fell down over one eye as she spoke. She brushed it casually back behind her ear. “I’m glad you’re hungry. I fixed a lot. Here, why don’t we spread some of that newspaper out on the table?” He sat up and handed her the paper. She took it and began to place it neatly over the glass table top.

Debbie Wray was a very precise girl. She lived a very orderly life. The townhouse was immaculate. This acute sense of order and attention to detail extended to all aspects of her life. Darryl Kendrick watched her delicate hands as she covered the table. He admired her, but at the same time he wondered if maybe that aspect of her personality was somehow related to the problem that he was feeling growing between them. The first day was so good, but now after five days she seemed aloof, distant and somewhat disinterested. It was one of those things that you just couldn’t bring up. He couldn’t. He was afraid of what she might say.

“Whatever it is sure smells good.”

“Oh shit, I forgot the shrimp.” She ran back into the kitchen. He stood up and lit a cigarette. A minute later she came back out with forks and napkins. "You want tea or a beer?” she said.

“All right, grab a chair.” He finished his cigarette and sat down. Then, she came out carrying a large pot, walked over and dumped the contents out onto the newspaper. There were quartered pieces of corn on the cob, shrimp, sliced smoked sausage, potatoes and lemon halves. The whole thing smelled like old bay. “Don’t eat the lemons, she said. “They’re just for flavor. Well, I guess you can if you want to.” She laughed.

“Happy birthday, Darryl,” she said. She acted like she was going to lean over and kiss him, but she didn’t. Her voice had a cool, matter-of-fact quality about it as though she was simply going through the motions. They ate pretty much in silence. Several times during the meal he had tried to get a conversation started, but she wasn’t interested.

Finally, he said, “I think I’m going to head on after supper.”

“I thought you were going to try and sleep a few hours before you left.”

“Are you sure that you’ll be okay?” The words sounded concerned, but he thought he detected a touch of relief in her voice like she was glad he was going. Five days had been too long for a first visit. He should have only stayed for the weekend, come down on Saturday morning and left on Sunday. That would have been much better. Maybe that was the whole thing he thought hopefully.

After they had finished, Darryl Kendrick went upstairs and packed his bag. He got his toothbrush and toothpaste and his shampoo from the bathroom, the shoes from by the bed and zipped up his suitcase.

“You got everything?” she asked as he came down the steps.

“Sure you don’t want me to make you some coffee? I’ll be glad too.”

“That’s all right, Honey. I’ll stop and get me a cup somewhere.”

“Well, come give me a hug,” she said. She stood in the foyer with her arms outstretched. He walked over, sat down his bag and put his arms around her. It felt cold and meaningless. He held her for an acceptable amount of time and then they kissed. There was nothing, nothing at all. “Goodbye Sweetheart,” she said.

"Call me when you get home. No matter what time it is. Call me. Promise you will?”

“I will,” he told her. He opened the door and walked out. She came out too and stood there while he got into the truck, started the engine and backed out into the street. She waved as he drove off. It felt good to get out of there. How could something that he’d so looked forward to for weeks and that had started out with such promise have fallen apart so quickly? He thought about it all the way home, but even after eight hours he was no closer to figuring it out. When he pulled into his driveway he took his cell phone and dialed her number to let her know he had arrived safely. It rang and rang, but there was no answer. 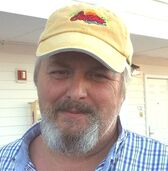 A native of Southwest Virginia, James William Gardner writes extensively about the contemporary American south. The writer explores aspects of southern culture often overlooked: the downtrodden, the impoverished and those marginalized by society. His work has been nominated for the 2016 Pushcart Prize. Gardner is a graduate of Virginia Commonwealth University and lives in North Myrtle Beach, South Carolina. His work has appeared in numerous publications including Deep South Magazine, Newfound Journal and The Virginia Literary Journal.
​