While the Vietnam War was being fought, the statue of Mary in an old lady’s front yard began to talk. When she predicted cancers and the end of the world, someone gouged her face off with the claw end of a hammer.  Then, they covered her with a big black trash bag, right over her veil, which was peeling-paint-China-blue, with white cement underneath. And under the veil, her hair was black. Then she was gone.  Where I was from, there were so many Marys, it was like they were birthed from the one giant Mary who loomed way up on Orient Heights over the city, 35’ high.

Taphaphobia (Fear of Being Buried Alive)

In the classical Mediterranean world, wives cooked by a small statue of Hestia, or Vesta, who was the inbred daughter of Titans. Her priestesses had two duties: keep the temple fire lit (for she was goddess of the hearth,) and keep their legs closed.  Failure to do the former resulted in being whipped by a long leather strop; for the latter, the Vestal Virgin (think: Procul Harum’s “A Whiter Shade of Pale”) would be wrapped with veils to muffle her crying and buried alive in a field outside of Rome by a wall.  Plutarch called this the most “sad and gloomy day.” In Scotland, in the ruins of an abbey, remains of a nun were found in a wall, too: bones collapsed in a habit, a bowl, the hardened puddle of wax from the candle. A wick.

Phallophobia (Fear of the Penis)

The other day, I saw a young girl in the middle of my street.  She was peeing like a man, looking at me over her shoulder, smirking, waiting for me to see the stream of ginger ale pouring down between her legs.  Hey girlie, I wanted to say, pulling her shirt at the breastbone, you want to see a monster pee?  Look outside your window tonight: I’ll be gripping the maple, squatting all over your back lawn.  A girl with a strap-on was nothing new to me, no, that wasn’t what enraged me.  It was how her friends stood away from her, laughing.  Clearly, in her group, she was the one who did things.

Once you’ve seen a snake on the footpath, you see them everywhere: the long rattling seeds of the shivering locust tree, an old hose, the iron hook dangling from the car door handle, your friend’s arm in a black Danskin holding out a Granny Smith apple.  When I was a teen, I parked in a car with a brutal boy on the Lynn Marsh, by the GE.  We heard a hiss outside, and then another hiss: I said Snake! and he backhanded me in my mouth. After that, things changed. 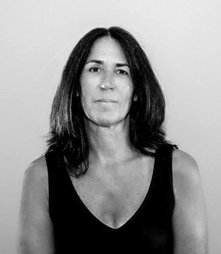 Jennifer Martelli’s debut poetry collection, The Uncanny Valley, was published in 2016 by Big Table Publishing Company. She is also the author of the chapbook, Apostrophe and the chapbook, After Bird, forthcoming from Grey Book Press. Her work has appeared in Thrush, [Pank], The Baltimore Review, The Heavy Feather Review, and The Pittsburgh Poetry Review. Jennifer Martelli has been nominated for Pushcart and Best of the Net Prizes and is the recipient of the Massachusetts Cultural Council Grant in Poetry. She is a book reviewer for Up the Staircase Quarterly, as well as a co-curator for The Mom Egg VOX Blog Folio.