In a Landscape: LV

Looking at each other just now, which is the intrusion:
the environment, as we’re trying to talk, or us? It’s worth
thinking about for a bit, how Morton Feldman
and John Cage were talking about it in 1966, the nature
of intrusion, where it comes from. There’s always another way
to look at things (is that music or traffic?), which seems to me right now,
another way to support the idea that doing nothing
is the best course of action in most situations. Just sit tight.

Once, when I was in high school, six or so of us
went to Brendan’s house for the weekend. His parents
were probably away. I think it was after their divorce,
and a couple years before his brother drowned. We got a case
of beer, and took it to a little park overlooking the Long
Island Sound, where we could wave at Connecticut. It was
night. It took almost no time at all for the police
to show up, the way they tend to do in these stories. I decided
the jig was up and just stayed sitting on the case of beer
resting beneath a little tree. Everyone else took off. Funny thing,
so did the police, giving chase. I still had a beer
in my hand, sitting there, watching them all run off
into the dark of the little woods. So I picked up
the case of beer and carried it back to Brendan’s house to wait,
and then that becomes something of a study.

When I was young, I lived in Orange County and ended up
going to Disneyland 35 times. I was trapped at “Yo ho,
Yo ho, a pirate’s life for me” once, for about 45 minutes. “Don’t tell them,
Carlos” one of the townswomen kept saying. We’re some music,
as our world is always coming to an end. We’re relevant awhile,
and then it’s some other currency with all the wrong faces on it,
and people are talking a language we’re never heard before.
I keep thinking that if I just keep sitting here, I’ll see us all come running back
out of the woods, some turn of the dial. And we’ll be numerous,
won’t we, and we’ll all matter, mostly harmless, sitting there
telling each other these stories, and each of us remembering it
so that we’re the one who gets away.

In a Landscape: LVI

The landscape is on fire, and where are you
going to start? Everyone and everything
is burning. Are you a firefighter or a fire chief? Where
does the buck stop? It was my name on the deposit slip. The deposit
was for just under $3,000, and it was missing.
And $2,500 was missing from the safe as well. Then they
started dragging everything they could find
into it. I was divorced at 20. I put a bunch of tape
on the side exit door so it wouldn’t lock. The lie-detector
guy said my answers weren’t very dependable, but weren’t
damning either. So there I was in my own little detective show. Well,
the tape was an easy one. I put it there when the drive-thru speaker
wasn’t working, and we had to keep running out and back,
and the door would lock behind us. It seemed a crisis
decision, so I didn’t think to make a note about it. I was being a team
player. And the divorce, isn’t that pretty much everyone’s story?

I remember once, when I was 19, I had a job interview
with a Wall Street firm. I can’t remember specifically
what the job was for. They just sat there on either side of me,
these two guys, asking things like, “Aren’t you just
chasing your own death?” I think that interview
fundamentally changed something in me. Not only
didn’t I want the job after that, but I also had a distinct
feeling that maybe it had never happened. Maybe it was a vision,
the last two cents I was going to get from the numinous.
The overcoat I was carrying didn’t fit me. It was a prop. Something
to carry. Reality is a parade of people twisting and saying “Boo”
as we’re all chasing our own waiting rooms. Or something like that.

“We have it right here. You were the one who signed the deposit slip.
You can talk all you want, but you can’t poke a hole in it,”
the district manager said to me from behind a massive moustache.
There I was in the office of a Carl’s Jr. in San Antonio, Texas, 1985.
He handed the deposit slip to me, or more, pushed it in my direction. So
I looked at it. What else was I to do? I picked up a pencil
and poked a hole in it. Right beside my name. A little empty space.
A little empty space with lead all around the edges. 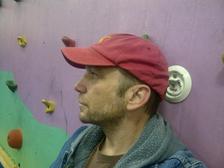 John Gallaher’s fifth book of poetry, In a Landscape, will be out in fall 2014 from BOA. He lives in rural Missouri and co-edits The Laurel Review. A collection of poems he edited, Time Is a Toy: The Selected Poems of Michael Benedikt will be out in early 2014 from The U of Akron Press.