My wheel fell off. I hit my funny bone
And the day commenced. Foul water swamped
The basement. The earliest anyone can be out
Is next Tuesday. There hasn’t been a rainbow
Sighted in over a year. Oil wants out of its tanker.
The captain smells of vomited beer.
A thousand white birds turn sticky black.
Bees fly off in droves. I don’t think they’re
Coming back. There’s an infographic online
That addresses the most popular theories.
I read an article that claimed we’re starting
To grow actual eyes in the back of our heads.
I would have guessed gills, anything
To steel ourselves for another round of attacks.
Had performance issues with my spouse,
Her understanding just made it worse.
The dentist hit a nerve. The trophy wine is corked.
Your grandmother invented the spork
But patent lawyers took her for a ride.
All that money should be rightfully yours.
The door feels warm to the touch.
Try not to think about it too much.
Last night I dreamed my teeth were coming apart.
The X-ray shows a worrisome blotch.
The underdogs are humiliated on the field.
Many that day renounce the sport.
Many don’t know this, but the Titanic had
A sister ship; she also sank. Her name eludes me now.
The search party is never heard from again.
Armed guards are refusing new patients.
Dial 911 if you want to hear a racist joke.
Our hero cuts the wrong colored wire. They’ve never
Heard your name back at headquarters.
Your tap water runs a shade of rust.
Your childhood’s a planet of dust.
The poem you’re reading combusts. 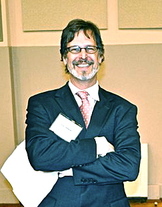 John Loughlin works in Business Development for a Fortune 500 in Chicago’s Loop. He lives with his wife and daughter in the NW suburbs. His poems can be found in Anti-, Drunken Boat, Forklift, Ohio, and other journals.