Of Stealing and of Being Stolen

My grandmother has skin, soft and white, like newspaper left in the rain. She fractured her hip a few months ago; lying back in a hospital bed with a string of rosary beads in her hands, she talked about her poor husband, Elio, who died of a stroke half a decade ago. Women in pastel scrubs, with prematurely wrinkled foreheads, gathered around her bed like a throng of onlookers at a vaudeville act.

“He had blue eyes, like Frankie,” she would say. “Jesus Chrinny.” She wrapped the beads around her knuckles like boxers’ tape, and she reached into a drawer beside her bed and, with the help of one of the nurses, she pulled out a stack of photographs in a Ziploc bag–mementos from before World War II were framed in greyscale: a wide tent as big as a city square, animals the size of ants led by even tinier people in clown makeup.

“My brother is there,” she said, and she pointed at a raggedy jester holding a saxophone in his left hand. “And that’s me”–her finger traced an invisible line between the clown and a small woman in an elaborate costume–“that was me before the war; that was before I met Elio.” I always imaged that she lay on the back of an elephant, elbow supporting a head of thick, inky locks, laughing coyly into the air, passing the lanky soldier on her thundering tank of hide and ivory.

My grandmother was born in Italy, but she was conceived in Egypt. Her family boasted, among other nearly unbelievable prospects, that they were the first acrobats to be shot from a cannon (not by a cannon–from a cannon). “The Flying Zacchinis,” her cousins were called. Diana Zacchini–having grown up in show-business–was accustomed to traveling long distances over short periods of time, and her father, a short, balding man who resembled Batman’s The Penguin, scolded her for talking to foreign men backstage. Not because the idea of a romantic pursuit was inappropriate for a young lady in the 1940s, but because hers was an age before the interconnectedness of social networks, of the internet, before cell phones, before pagers. Frankly, long-distance relationships didn’t quite work out.

Later that decade, a wiry soldier with bright blue eyes and a calm smile decided that he wasn’t going to try and foster a love that stretched 4,300 miles, from Paterson, New Jersey, to Rome, Italy. He was going to bring Diana to the United States, and he was going to marry her. Diana’s mother wore black to the wedding. She had no hard feelings for Elio. She did, on the other hand, have a problem with the idea that her only daughter–dancer, musician, actress, acrobat, generally imperative facet vital to the success of her parents’ business–was dismissing her family’s successful reputation to be an American soldier’s war bride. If you were Italian, you stayed in Italy. No ifs, ands, buts, or obscene hand gestures about it.

Years later, my great grandmother visited her daughter and son-in-law in the United States. I wish that I could’ve been there (and then) to see her blinded by all of the bright, flashing billboards, the giant yellow arches hanging from red roofs, the massive glass simulacrums of hamburgers and hot dogs that gleamed in the sunlight. I would have loved to hear my grandfather, in poor Italian, explaining the function of a “drive-thru” to his flustered and confused mother-in-law. The culture shock, it turns out, didn’t last very long. My mother used to tell me stories about how her grandmother was addicted to the World Wrestling Federation; one minute she would scream and raise her fist in the air like a militant salute, lunging toward the television screen as one ruffian bodyslammed the other into a turnbuckle, and the next, she would cover her mouth, hollering, “don’t kill him, don’t kill him!” She would cringe and hide her eyes, but only until the commercials came back on.

Page 1, paragraph 4: “His pulse quickens, and he reaches for a small volume whose back says The Secret History of the Zacchini Cannon, in curly golden letters.”

Fuji Akamatsu–my other grandmother, my father’s mother–doesn’t show up in any books. Not to my knowledge at least. If she did, however, her name would probably line the pages of a terribly sad novel. Something by Haruki Murakami. Something named after an old enka song.

If children took their mothers’ surnames, my father’s would be Akamatsu–Japanese for “red pine tree.” When his mother moved to the United States, she changed her name from Fuji Akamatsu–named for the snowcapped mountain–to Molly. A pretty name, but no mountain and no tree.

On the other side of the world–far from Rome and far from Paterson–Boris Jiuliani, an Italian American machinist, struggled to pry a discarded katana from the bloodied corpse of a Japanese soldier. Or at least, that’s how the story goes. My dad’s jackass-of-a-brother, Mark, pilfered the thing from my grandparents’ home in Florida, a few days after Grandpa Boris died. According to my father, the katana was–and legally is–mine.

My father’s father too took a bride from her native land: a small woman with eyes like pistachio shell cracks and short, thick hair. Much like their Italian showbusiness counterparts, my Japanese relatives did not hesitate to express their disdain for the country whose poisonous culture led to grandma Fuji Akamatsu’s death from lung cancer in 1995. She did not smoke. Neither did her “gaijin bastard” husband. They blamed the flag though, the hazards of American life–the culture was a carcinogen. My grandfather died a few years later. Mark took the katana. Now we are where we are now.

The Red-Pine-Trees didn’t fly over for his funeral. Boris was a thief, a kidnapper, just like his sword-stealing son. And my great uncle–a wealthy man, the owner of a construction company in Tokyo–was finished with our “branch” of the family–pardon the pun. When he made this clear, his kin followed suit. I didn’t know him, but I knew my second cousin, Mika. She taught me how to count from ichi to ju. I had met her at my grandmother’s funeral. I thought that I would see her again at my grandfather’s. I was mistaken. I missed her bright red glasses and her self-taught English.

Scholar Morris Low’s account of contemporary Japan, Building a Modern Japan: Science, Technology, and Medicine in the Meiji Era and Beyond, describes the way that Habuto Eiji, editor of the sexological magazine, Seiyoku to Jinsei (Sexual Desire and Humankind), compared modern Japan to the modern Japanese male–full of vitality and sexual prowess, bursting with military strength and total control of “nerve force” (Low 37). When I think of my great uncle, I imagine him as Eiji imagined Japan: he stands tall with his arms crossed and his lips pulled into a tight, unreadable line. He is strong and stoic, his work hours are nearly suicidal, but his hair has only begun to gray even in his old age. The Japanese culture, like my great uncle, prides itself on a merciless work ethic, and in contemporary global society, new Japan has painted itself like a bullet train, rocketing ahead with little attention paid–little care given–to its Western counterparts and their silly funerals. The West didn’t fit into Eiji’s model; the West was a sickly, weak man with scrawny arms and a puny brain.

On holidays, my Italian grandmother, my last grandparent, talks about the people around Paterson, and she calls them “colored people,” and she says that she feels pity for them. I tell her that she’s Sicilian–that she may very well have black blood in her–but she gets angry with me and tells me to stop being such a rompipalle. I ask her where she’s hiding her balls. She laughs, and she raises her fist into the air like a pugilist; she steals a loaf of bread from my plate, and takes a rebellious bite. She’s tough for eighty-eight. She’s the last of her kind–the last Piai, the last remnant of my mother’s culture–like the breathing history of an entire civilization across the sea. And miles and miles away, my great uncle, always young in my thoughts–young like new Japan–taps his foot impatiently, observing men in forklifts carrying pallets of thick cement.

Low, Morris. Building a Modern Japan: Science, Technology, and Medicine in the Meiji Era and Beyond. New York: Palgrave Macmillan, 2005. 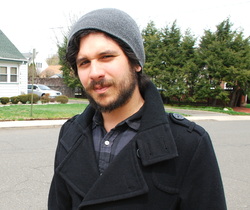 Joseph C. Jiuliani lives and writes in Paterson, New Jersey, with his Pomeranian, Sherly, and his partner, Emily. He is currently working on a novella, compiling a collection of poetry, and eagerly awaiting the singularity.