​I left for the dinner expecting animal heads. I told my wife: twenty bucks the little girl’s doll will have pins in its face. My wife said: I think I have pink eye. We argued at the stoplight, and I pulled over to the curb. My wife walked home and I continued to the Wileys’ dinner alone.

Earlier in the day, one of the candidates for my job had dropped by the office. She gave me a going away gift and let me know—Applicant-to-Chair—that the likelihood Mark Wiley bred tarantulas in his living room was high. She’d seen Wiley’s desktop background in passing.

I noted this tidbit on a sticky note labeled “WILEY.” Alongside tarantulas, I’d written screamo music and wands. Most concerning: Lives in an AT&T bunker(?).

I’d relayed these rumors to my wife on the drive over. She’d patted my hand and primed me with a more palatable view of the Wileys’ mysterious lifestyle: essential oils, The Dave Matthews Band, a house above ground. Mark Wiley might study—and display in his office—a very specific form of 10th-century death mask, and Janet Wiley might very well walk around in the nude, but they had a child now.

I arrived at 122 Pine Street twenty minutes early. Without a reassuring wife to distract me from the possibility of spiders—pink eye, my god—I had sped through all the lights. I told myself: good thing I’m early so I can get a feel for the neighborhood. I hadn’t been able to do this with the other candidates. They’d treated my wife and me to drinks at restaurants, rather than invite me into their homes.

The Wileys’ house was two-stories tall with a porch and a white picket fence. The lawn was trimmed and covered with plastic deer statues. A pot of mums sat on the porch, next to a pumpkin. I relaxed. The house looked aggressively normal. When I was first hired at the university, I’d bought a place much like the Wileys’—pruned shrubs, green lawn. I considered it my first home. Before, I’d slept in a tent in someone’s yard. I’d worn my hair long and experimented with men. At night, we’d watch the stars for entertainment, because back then I didn’t have money for shows.

Janet Wiley met me at the door. Her hair was long and dark. She wore a paisley dress from Christopher & Banks, one my wife also owned. She took my hand and we exchanged a Victorian greeting, in which she curtsied and said: I am happy to make your acquaintance, Chair Jacobs. And I replied: And I, yours, Mrs. Wiley.

I’ve been brushing up on my 19th-century poetry, Janet said. She stopped to slip her shoes off on the Welcome mat.

Really? I said, not surprised. The spouses of the other candidates had also expressed interest in my discipline.

She took my coat and draped it in plain sight, over the couch. Beethoven’s String Quartet No. 12 warbled from a gramophone in the living room. We toured the first floor slowly, walking through the kitchen, dining room, and even the master bedroom. Most of the rooms were empty, though I noticed that Mark and Janet slept on the same color duvet as my own. There was also a dog, Spot. He limped around the house after us, accompanying us on the tour.

In the kitchen, we encountered the daughter. She looked up from scratching paint off the wall and bared her teeth. Her name was Meg and she was also wearing a dress from Christopher & Banks, although hers might have originally been a shirt.

Mark Wiley appeared in the doorway. He wearing a suit and tie. His orange hair was pulled back in a braid. Chair Jacobs! he said. We shook hands. Janet poured me a scotch in a tumbler of ice.

I hear congratulations are in order, Mark said. A fellowship appointment in Rome. What luck.

Oh yes, congrats! Janet said. She pulled a plate of steaks from the oven. The polish on her nails was black and chipped.

Thank you, I said. I straightened my shoulders for chitchat. We talked about the weather and the color of their backsplash. Slowly, business leaked in. They wanted to know how many outside candidates were being considered, how many faculty members from the department had applied. On the counter, the steaks were growing cold.

Are you looking for something? Mark said. I was peering behind the refrigerator.

I heard you raise spiders, I said.

A bowl of brown guacamole appeared in a drawer. We processed to the dining room. Mark carried the bowl. Janet, the steaks.

The table was set for four. Brownies with lavender petals sprinkled on top served as its centerpiece. Janet placed a rib eye on my plate and poured me another scotch. She poured herself one, too.

When are we going home? Meg asked.

The steaks were bloody. I tore at the meat, cutting it into cubes, eating three bites at a time. The four of us chewed determinedly, blotting blood with cloth napkins. Our conversation circled back to Rome. Lots of old buildings, we agreed. At the end of the meal, Janet boxed up the steak in a to-go container. I fed it to Spot on the porch.

At home, my wife was watching Game of Thrones. I watched it with her through the front window. She pretended not to notice. In her nightgown, she looked like a body pillow.

How was it? my wife asked when I finally walked inside. I climbed into the armchair and we wriggled around until we were comfortable. Our noses almost touched. Close-up, I could see my wife had rubbed her crow’s-feet with blush.

Your poor pink eyes, I said.

It went as expected, I said.

I pulled a piece of dog talon from my pocket and placed it in her hand. The nail still had chocolate on it.

I found this in my brownie, I said.

My wife closed her eyes and dropped the dog nail to the carpet. Thank god I didn’t go, she said. Then: And? What did you think of him?

On the TV, another man was killed. No one wore the crown for very long on that show, but everyone seemed to think they’d make a really good king.
​
My wife fell asleep when I took too long to answer. I watched the next episode alone. ​
Copyright © 2017 Map Literary and Katie Young Foster 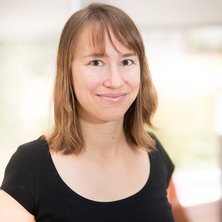 Katie Young Foster grew up in the Sandhills of Nebraska. She is the 2016-17 Creative Writing Fellow at The Curb Center in Nashville, Tennessee. Her stories have appeared or are forthcoming in The Masters Review Anthology V, Arcadia, The Boiler Journal, SmokeLong Quarterly, and elsewhere. She is the winner of The Masters Review Anthology contest judged by Amy Hempel, and has been recognized by Arcadia Magazine’s Dead Bison Editors’ Prize in Fiction and the Zoetrope: All-Story Short Fiction contest.