The Poet as Art Critic

J-peg surrealism for the twenty-first century: his palette, Technicolor shades of Kodachrome-induced mordant dye-stuff; his tint neon; his blue the hue of windshield washer fluid; his yellow exclusively nuclear.

There is a lighthouse on the moon, but not any moon, a moon that encircles a paint factory, where the brushes bristle over who revolves around whom. Translucent green reeds grip the water’s edge and bend their top-heaviness toward the centrifuge of radiation fallout. And that celestial body that hovers over gossamer-wing clouds? A giant breast? Or a white chocolate Hershey Kiss? Same thing.

It’s all the same thing: sex and food, art and god. Did I say gossamer wing? Dickinson used the word tulle to denote the ethereal; even silk is too heavy with the weight of this world. Even prayer gets short-circuited, translated into waves that never touch the shore no matter how electric.

Rumi’s shepherd knew that everyone experiences god in her own way. Still, Moses had to be told. Is it any wonder we haven’t learned
yet?

Our desire rides in on gold-plated palanquins, transporting our hearts to the river of despair, to be washed clean of their sins, the sins of loving that which was never ours to love. But that, too, is illusion. The Buddha teaches us to laugh, the boon of non-attachment. But tell me, why do our thorny blunders speak of the elasticity of passion gone limp and timid when truly our hearts beat in watery beds, buoyed up by the salt of experience, floating not drowning.

You are waiting in the library with its stacks of books and stained glass windows; waiting in sunny coffee shops and dimly-lit barrooms; waiting at the dining room table, with three small children prattling away; waiting for the sun to set so you can fall asleep and for the sun to rise so you can, too, just because you can, because when you were ill you could not; waiting for a letter to arrive in the mail to seal a deal for a book you have yet to write; waiting in waiting rooms and bathrooms and in a double bed, alone; for sex; for love; for a still small tremor; for red lights to turn green and for green lights to turn red, just to prove to yourself that you can until it becomes absurd, waiting.

For a period because cancer treatment has stolen your youth; for scans and scopes to tell you the cancer has not returned, or to tell you it has; for your mother to die because you are so afraid of her death it hurts to be with her while she is still alive; for the boots you ordered to arrive in the mail; for snow because this year you will dress the part and not quit after one snowman while the children scream for more; you want more; you want to scream for more.

Because you cannot imagine what life would be like without it, this waiting, only you are not a patient person, and because you never had anything that you didn’t work for, you deem waiting a kind of work, the work of martyrs, tortured since the day they first said, I want, since they first wanted that second kiss.

Waiting, in train stations and on subway platforms; in airports and vestibules and foyers; in front of elevators and computer screens and outside post offices that open at nine o’clock and it is always eight-fifty-eight. Waiting because something good is on its way, because nothing good ever stays, and if you don’t wait for the next best thing, you may very well end up without the right boots and no postage stamps, and then you will never return that letter that never seems to come, the one that always begins, Dearest, I have been waiting a long, long time for you. 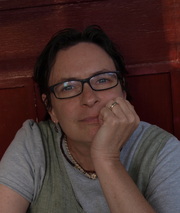 Michelle Valois lives in western Massachusetts with her partner and their three children. Her writing has appeared or is forthcoming in TriQuarterly, The Massachusetts Review, Pank, Brevity, Fourth Genre, The Baltimore Review, The Prose-Poem Project, Anderbo, The Literary Bohemian, and others. She teaches writing and humanities at a community college and blogs at http://www.readmelikeabook.net/.