My brother’s wife makes alphabet soup, and meatballs from three-month-old frozen burger she bought for a dollar at the Dollar Store at the south end of town, right before Scottville Road unfolds down the hill past the cop anchored in the spot where the speed limit changes from 45 to 30. Then the road passes over the slow Pere Marquet River and out into the countryside, where asparagus shoots up in spears like penises until their short season is over. Then the plants become feminized and grow into green ferns. In Fall, they turn nearly pumpkin orange. Finally in Winter, they are petrified in the brutal cold, infra-red photographs frozen in place.

My brother eats the alphabet soup slowly, looking for messages from aliens to appear. He knows the apocalypse is coming. It will arrive before the asparagus thaws and the plants are cut down to ground level to appear again, briefly, as penises.

As I prepare for work, my brother’s in the next room with a spike in his arm. I couldn’t let him go homeless after his wife kicked him out. I offer to make him meals, but he has no appetite. I think he’s turning tricks for the drug.

I splash on cheap bay rum that smells strongly of cinnamon. Cinnamon is a natural anti-depressant. On the bus ride to work, a woman with chemical sensitivities glares at me. The bus has big heavy wheels. A friend of mine was crushed beneath a bus’s wheels when she lost her balance on her bicycle. It could have been this bus. I worry about alienation, sexuality, income, income tax, my brother. I glance at an abandoned newspaper. A four star general has had an affair with a triathlete. His dumpy wife is majorly pissed.

3.
​
Film chemicals poisoned us. Toner and fixer made Kodak rivers. Even as we set our images in silver paper, we destroyed our fleshy selves. We drank in carcinogens, sweated out fluorides and hydrocarbons. Our bodies became bulbs streaming ozone.

I’m full of chlorine. The city pool is inside me. Goggled swimmers stroke up and down my ribcage. Now Kodak has followed Polaroid into the bone-yard. We’ve gone digital. My wife’s gone surreal.  She’s an iphone on a neck. She’s still good in bed, still has big tits, but I can’t look her in the eye, there being no eye, only an i. 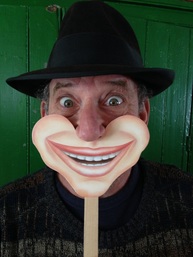 Mitchell Krockmalnik Grabois has had over a thousand of his poems and fictions appear in literary magazines in the U.S. and abroad. He has been nominated for numerous prizes for work published from 2011 through 2015. His novel, Two-Headed Dog, based on his work as a clinical psychologist in a state hospital, is available for Kindle and Nook, or as a print edition. To see more of his work, google "Mitchell Krockmalnik Grabois." He lives in Denver.