Some of them shrill, some of them mute.
Poverty and glue.
The seasoned pro has little to prove.
Not even sure where some of them live, or what they do,
Or which relations they are still allowed to speak to.
Fillet,
Divertissements: charming!
You can be the entertainment
or you can watch. For instance, this scene is coming:
They must not
Marry
Even if they marry.
They do not leave this zip code of their conception, not really.

In our house we read books about brains.
Well, actually my husband reads them
And summarizes to me while I’m brushing my teeth
And the kids don’t want to hear more than a little at dinner because
Tommy refuses to consider his brain tumor now that it’s gone;
It’s mostly my husband reading aloud and me thinking about it:
Him on the couch, me on the bed;
But from this I know that between
14 through 29 while my
Pre-frontal cortex was developing compassion,
When my skills that I did not need were waving goodbye,
When I was awash with new enzymes, I was
Damaging my brain with friends and strangers, or alone, as my husband was--
So this subject interests us,
This is something we have in common like religion or a favorite childhood TV show.
We had been careening around, making mischief.
Not together but it’s all the same, the way
You make mischief and mayhem when you’re far, far gone;
I was even charged with “Malicious Mischief” once, though the charges were dropped.
After these books about brains, I think
There is no way for me to be normal: my serotonin and my dopamine will never be right; I can’t expect to be like I was at 12 or 13. At least my brain chemistry was not
Also terrified of a hand across the face like my husband’s was.
I wanted to fade until I became invisible and got that
To happen. If you don’t want me to take the new drugs that help me survive
Because: What is the difference, you are still taking drugs?
Because you think this is the easy way out, or whatever your criticism is about:
Then you want me to die (and maybe you’re right, but the narrative is mine)
Because the doctor and the drug
Made me live and the doctor and the drug made me sleep again.
My husband can’t take the drugs so it is harder for him:
I see darkness and too much insistence take over
His body and brain. I am on a lot of drugs because
These drugs agree with my body whereas they don’t agree with his;
But the brain books say that there is a way to actually change
The damage over time and these paragraphs give him incentive
To live, when death calls out to him again.


PROBLEMS IN MY INTERIOR MONOLOGUE

When we read the Pulitzer Prize winning play
I was lighting my desk on fire.
When we watched the Academy Award winning film in the “large group center”
I was asleep while everyone else sat cross-legged.
I forgot that. I forgot that
I skimmed a classic book for an English-whatever-number class when I was loaded.
I think back and think that I didn’t understand the author but sometimes I’ve reread
The books and I remember that I was sitting in a bed-and-breakfast,
Or an apartment,
Or a warehouse,
Or on a boat,
In a bed,
I was reading and completing my assignments
Buzzed on champagne or wine or the spirit of something dead;
I was hammered and I remember the chapters or the lines
but they didn’t really bore into my head
like literature is supposed to--
I forget, I remember, I’d forgotten I was afraid
All the time, of what could happen to me.
Therefore, I did not want to
Move someplace, or lie with someone, did not attempt to achieve greatness:
I was wasted.
If I was thinking of a city or a friend or a future I was thinking about where
I’d drink and who would drink with me and I didn’t want to be
With people who wrote me correspondence that said,
“You smoke and drink way too much.”
I’d forgotten about those. I forgot that I said,
Well, fuck them, there are always
ways to drink alone
and I found them.
I was fine with being smashed and trashing empty bottles,
Hungover and proud.
I’d forgotten how
The play, the movie, the book, the city, the friend, the wedding, the funeral, the outing, the art show, the Olympics, the picnic, the train ride, the end of the work day,
Was about getting plowed. 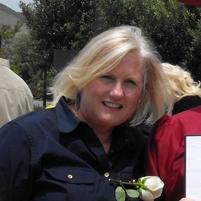 Stephanie Brown is the author of two collections of poetry, Domestic Interior (University of Pittsburgh Press, 2008) and Allegory of the Supermarket (University of Georgia Press, 1999). Her work has appeared in journals such as The American Poetry Review, Ploughshares, Slope, Pool, ZYZZYVA, LIT, Green Mountains Review and six editions of The Best American Poetry. She is an administrative manager for a large public library system in southern California, and the poetry editor for the Zócalo Public Square website.