Objective: To determine how many objects of a certain type we’d need to reach the sun.

Before we start, please note:
the distance between the earth and the sun is 92,935,700 miles
and 1 mile = 63360 inches
All figures below ignored decimals, and are approximate.

A tube of lipstick is about 3 inches long.
That would mean we could stack end to end about 21,120 lipsticks in a mile.
It would take 1,962,801,984,000 lipsticks from the earth to the sun
about 1.9 trillion lipsticks.
It would get melty toward the end.
Bottles of nail polish would get you about the same distance.  These would be highly flammable.

I guess you could combine the above.  Like if you couldn’t find enough cans of sterno, for example.

It would take about double the amount in postage stamps as lipsticks.

I estimate that it would take roughly about 6x the amount of vitamin C tablets, grey colored eyes, beans and gumballs as lipsticks to reach the sun.  Unless we’re talking about “Grey Eye,” the band.  In which case, you can skip ahead to the Jack Lemmon section.

It would take roughly the same amount of $5 bills, TV remotes, tacos and staplers to reach the sun.  Or about half the amount of candles and ball-peen hammers

It would take about roughly the same amount of mandolins, certain cacti, tulips, pumpkins, T-squares, some putters or cats to reach the sun as it would take banjos.

A lobster bib is somewhere between the size of a piece of poem and a banjo.

Jack Lemmon was 5’9” tall or 69 inches tall
(right in the middle of my expectations before I knew the actual number).
There would be about 918 Jack Lemmons in a mile.
It would take about 85,314,972,600 Jack Lemmons to reach the sun.
How would we do that?  Cloning?

It would take about a quarter fewer horses than Jack Lemmons to reach the sun.

A torpedo is way longer than I thought.
I thought they were the size of a banjo, but they’re not.
If an average torpedo is about 23’ long
you could fit 229 torpedoes end to end in a mile
and it would take 21,282,275,300 to reach the sun.
This is a lot of weaponry and maybe we should rethink this.
Seems a little dangerous.

It would take about as many Tesla coils as torpedoes to make it to the sun if we include the sparks as part of the Tesla coil’s length.

The largest poplar would grow to about 165 feet.
Let’s use this number so we can use fewer trees.
We would need about 563,246 poplars end to end to make it to the sun.
Maybe that’s like one big forest?  This would probably work.

Measured in willow trees, it would take about 4x the amount of poplars to make it to the sun.

The Hudson River is 315 miles long.
We’d have to stick together 295,033 Hudson Rivers to reach the sun.
They’d evaporate by the time they got there, so how would we really know how it all worked out?
Maybe we’d need more to actually make this happen.

The asteroid Ceres is about 580 miles in diameter
or roughly the size of Texas.
We’d need about 160,322 asteroids to use next to each other as stepping stones to the sun.
That’s not actually that bad.  Doable.
We’d need a bit less than half the asteroids compared to Hudson Rivers.

A version of Verdi’s Requiem from 1939 was 80:13 long.
The first question is:
how long would it take Verdi’s requiem to reach the sun?
Sounds travels at 767 miles per hour, and I guess the length of the piece of music is of no consequence (unless we’re going to be very specifc and determine if the sun will listen to the entire piece of music).
I THINK it would take 121,167 hours (or 5038 days) for Verdi’s requiem to reach the sun
plus 80 minutes if the sun will listen to the piece in its entirety.
The second question is
how many Verdi’s requiems would we need to stack end to end to reach the sun.
And is this even a real question?
John Bloomberg-Rissman says, “You can conflate space and time by considering each iteration of the requiem in miles - how far sound travels in 80+ minutes.”
The piece is about 80 minutes long.
It will travel 1022 miles in 80 minutes.
Therefore, we’ll need 90,935 requiems to fill the space between the earth and the sun.
Other 80-minute long pieces of music we could use to make it to the sun include the 80-minute Piano and String Quartet by Morton Feldman and Shostakovich's 7th symphony.
This isn’t exactly something that we can walk on to get to the sun
but it’s something.

Using Facebook, I crowd-sourced the following objects to work with in this poem:

I used most of the above objects, but certain things unfortunately were indeterminate for this exercise.  For example, the size of frost or a cave or sauerkraut or jade or vanilla ice cream can’t really be established.  A “blivet” is described as an “undecipherable figure,” which was pleasurable.  I might have been able to determine how many phonemes it would take to make to the sun, but that idea made me tired after calculating the Verdi.

Tallahassee embraces the sun tonight
hugs the distant tides in Antarctica
A yew tree hung with stars, sixpence, nightspirits, Gurdjieff
Hold this poem out in front of you
Does it block the sun
from reaching the earth?
A daughter does not rotate
around a distance earth
Emily Dickinson:
her face a flip book
or a festival?
The moon god of Arabia goes through phases
gives off its own light
in the form of 70s Philadelphia gangs
Do you have an opening?
Are you hollow?
History has no atmosphere
in the Hotel Brussels
Her down is blue and is not visible to observers
She is not visible except for her shadows
and their summary
her jellyfish and their keen ropey tarot
Was his love landing a hoax?
Most likely formed
out of Nags Head now full
Alligators might orbit the earth
out of their waters
The July 31st, 1976 of my life
its palaces, pictures, phases
songs played in order
A reversal represents my heart
and its ponyphonic sheet music
The surface seems to change
and shines down with its symbolism
The moon underwater stains a road in Tampa
The moon tattles our valleys
Gold-chinned warriors, their wallpapers yellowed
Yes shall be my home

A flat machine and its peoples
A composter of the lord’s diet and fullness
A bazaarbox
A chronicle of crust and mantle and core
cooked in the screaming diet cookbook
The earth emits a terrestrial radiation
A dragon awakes
to the exploding elements in teen personality
his girth itself against all motion
girdled in vintage books
We are a groan scripture that orbits around the sun
You have swallowed all my sheet music
Your radius listens for meteor impacts
You hum in b flat, but you’ve been cooling your avatars
We lose energy to space only at night
Foldable layers of flowers laugh hottest to coolest
Other big round things
never say things to the sun
This is a poem on its full textual axis
Preludes in plate tectonics, our platelets
She rejects him, rotating counterclockwise, then clockwise
We will be destroyed by fire without art
weighing the same as the color blue vs. orange
We have been abandoned in a manga sanctuary 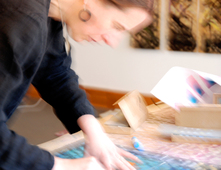 Anne Gorrick is a poet and visual artist.
She is the author of I-Formation (Book 2) (Shearsman Books, Bristol, UK, 2012), I-Formation (Book 1) (Shearsman, 2010), and Kyotologic (Shearsman, 2008). She has collaborated with artist Cynthia Winika to produce a limited edition artists’ book, “Swans, the ice,” she said, funded by the Women’s Studio Workshop in Rosendale, NY and the New York Foundation for the Arts. She has also done extensive collaborations with artist and architect Scott Helmes and poet John Bloomberg-Rissman. She is co-editing with Sam Truitt an anthology of adventurous poetry from New York’s Hudson Valley called: In|Filtration: An Anthology of Innovative Poetry from the Hudson River Valley (Station Hill, Barrytown, NY, 2014). A new book, A’s Visuality, is forthcoming from BlazeVOX Books.