​
​WE WERE CHASING SENSATION. She asked me to tie her to the post and I remember the black hole expression she painted on as I felt the heat go from warm to wound. We were chasing sensation when we cut ourselves to Arvo Pärt for the contrast. When we burned our belongings, we had hoped to staple on some new phenomena to our souls as onto primordial bulletin boards—but nothing happened. She shaved her head and destroyed her performative societal roles, took on a new name, face, story, and lived a “man’s life.” I attempted to feel womanhood through performance. There’s no way to force dysphoria and there’s no point and so we decided that this was the wrong direction. We took our credit cards and forced poverty by ending up in Paris. We took the metro and experienced unknowing with notebooks in our hands. What was it comprised of?
​Unknowing:​
1. Ambiguity
2. Worry
3. Excitement
Each component while having their own recipes ultimately boils down to disinterest when experienced in abundance. We have felt unknowing in abundance. We overdosed on spontaneity but continued in fashion as it tended to produce the most ambiguous results. We took the metro from the airport and rode for hours. The car we remained in was spotless but maintained a grittiness which mimicked that of any other city. We observed every individual with great care. There were plenty of businessmen, the fatter they were the more caricatured we made them. We saw women with pink hair and tattoos and viewed them as young-kin. We discussed sharing our research with someone who may be open to helping us and ultimately decided to do so with decisive helping from every young punk who rode the metro that day.

We got off at Montparnasse because Ionna was at one point fascinated with the derailment of 1895 and the bridge-like shape the train took in the photograph. We stood outside the train station in January’s loving frigidity and attempted to superimpose our image of a train smashed through the front, but the glass structure in front of us was too much of a blockade. I took her and kissed her in front of the train station as if to create a scene from some nameless movie which we’ve seen time and time again. My right hand firmly in the crook of her back and the left holding her head, our lips merged into one as buses continued to drive around to assure us there was nothing new here. We mourned the death of our imagination as we walked to find substance.

​In a café we ordered by pointing at items on the menu. We ended up with something which had duck in it, a myriad of breads and cheeses, and an assortment of different drinks. The espressos and coffees were straight-forward, but the liquors were ambiguous. The two of us sat at a small table which was now filled to the brim with plates and drinks and we began to consume it all. This ritual was a common practice. Each taste abundant with its own descriptive properties and we had hopes that through excessive combination, we’d find something new. This was commonplace for us. The occurrence ultimately leads to vomiting and attempting to process what each food felt like as it came up. Some food had a rubbery sensation to them and others more concrete, like pebbles tumbling out of a stream.

We remained seated out front as the umbrella heaters kept us relatively warm. We were the only patrons who opted for outside seating with a meal, but the soft snow kept us company. A man wearing a long black-linen winter coat and brown khaki pants sat on the opposite end of this purple tented café. His jacket had a palm-sized hole in the back of it like a target, he smoked a cigarette, and vanished before the waiter came.  We left 200 euros on the table and opted to follow him. The man wandered down an alley filled with trash bags and dumpsters. We were convinced we’d find a place to score heroin.

The man sped up and we found ourselves chasing a Parisian stranger in the heart of winter as if we were spies or gestapo. Sensations included adrenaline, spikes of pleasure, and more unknowing. We ran still a bit drunk from the strange assortments of liquor we imbibed, and our feet were sliding like automobiles in rain. He kept forward without looking back—there was no acknowledgement of our presence, but we tried our best to keep up. The man jogged forward, and we followed in what looked like an orchestrated dance between three actors. Time eviscerated itself into the blackening night and the man stopped at an older looking building. We didn’t know what to do so we stared, taking in the aging architecture, which looked like what we had hoped Montparnasse to be. The man did not acknowledge us. He fumbled with his keys and went up to his presumable luxury apartment. We stood in silence arm in arm with no plan.

A book fell in front of us, a nameless journal, and then another. Another, and another, as if raining. We saw the man throwing books off from the top of the balcony and he screamed, "Welcome! Come up! Come, come!” The adrenaline surged, and we continued up into the apartment building, which had been left unlocked. We arrived in an expansive room with marbled floors, and bookcases surrounding the perimeter. We found beautiful strangers—persons in vivid suits and persons in spectacular dresses. Individuals who sat on neither gender binary but conformed to some incomprehensible fluidity. The man with his targeted winter coat was speaking to a group of strangers while tightening the bolts on some strange mechanism fixated to the side of a bookcase. It was a bulbous machine which looked as if a large mechanical sunflower had grown a bulging silver tumor on its stem.

We stepped over syringes and pages torn from books we’ve never read. We rubbed elbows with latex-adorned, ambulant statuettes. I tugged on Ionna’s black winter-coat on an urge and she propelled me forward. The machine was all that mattered. I remember the distinct force pulling us in. It was as if some climax existed in a stem of iron. There was something about this man’s eyes from across the room. We saw mirrors in empty irises. The bottomed depth of a dimension we understood in our dying chase for sensation. Everything gets blurry here I remember the helmets and clutching Ioanna’s hand. It was cold and dry. I remember the anticlimactic curves of her bitten fingernails.

​Streaks of gold in the ripples of the Seine spiraling out into skyscrapers crashing upward into astronauts and burning out like exploding stars. They felt it, their bodies inverted, superimposed onto one another, merging chromosomes. Sensational fires burned from within, born to drown in perpetual birth. Cities turned countries turned planets like soft-shell crab when heated too hot. Ayahuasca, Ibuprofen, gin, and blood, all on the tongue, everything and everyone—we were chasing sensation. We found it. 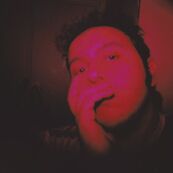