You might think this hospital
contains a healing ward for injured flowers,
a quiet damp sunny place for them to recover
from mower blades and weed-whackers and mites,
from trampling boots and sprayed-on poisons,
a place where their growth could be aided and assisted

by dedicated staff. Instead it houses an Assisted
Living Center, abutting the hospital
wing, where old people, not yet fully poisoned
by their own meds, watch TV, re-pot flowers
and wander haplessly around. They might
thinks it’s not forever, but they won’t recover

as aides struggle to cover and re-cover
their shivering limbs and assist
them in the bathroom. And they might
express gratitude to those workers and hospital
volunteers, but they don’t. The flowers
left by their bedsides could be poison

fairy tale apples. But it’s them who embody the 3 poisons
identified by the Buddha—who assured recovery--
Delusion. Craving. Hostility. Right before his Flower
Sermon, wordless and mute, meant to assist
his over-thinking disciples whose minds were too hospitable
to conceptual thought, who, given the chance, might

try to deify him, rather than gathering all their might
to pay attention to their own minds. And the poisons
accumulating therein. Perhaps a hospital
is the best place to examine sickness and recovery
and how to do it without assistance,
the way bushes, trees, even flowers

repair themselves or perish. It is this flowering
the Buddha endorses. Even a mite
has a Buddha Nature. Assist
by doing no harm, and you eradicate the poison
in yourself, and thus you recover
yourself—leaving shed husks and petals in the hospital.

After a while it seems pointless to enter the dark wood,
making sure to stumble upon the right entrance,
ensnared in brambles, asphyxiated by swamp
gas, on the off-chance some unworldly sacred structure
might appear—its host secretive and welcoming
and his daughter, who might not be his

daughter, leashing the hounds whose hiss
is prescient. If your venture fails you would
have lost seven years of your life. Welcome
to middle age where you’re no longer entrancing
(if you ever were) where, unless you have structure
to your life, your every day will be swamped

by the every-day. Here, in the Great Black Swamp
where you dwell, croaking frogs and hissing
snakes eradicated a century ago, replaced by lawn structures.
manured fields and lit, marked paths through the woods.
Now it’s all about finding the entrance
in order to exit and not wearing out your welcome.

Everyone says you should welcome
this reprieve from the fumes of the swamp,
sweetly noxious as they are. How entranced
you were when the castellan opened his
portal and urged you into the dark silent wood
to the monster whose defeat might re-structure

reality—yet this is a flimsy narrative structure,
you should heartily welcome
its dismantling. For surely you would
do all you could to avoid the swamp
of despair and the detestable hissing
crowds as you cower back to the entrance,

defeated, the magic spring’s entrance
still blocked, the impenetrable structure
unassailed. As for the beast—you never wanted his
demise, you secretly suspected the welcoming
advances of the king’s daughter and the swamp
of her sex. You never trusted the would.

Rasalila Dance from the Bhagavana Purana

Nothing can keep them away, once they hear Krishna’s
flute and rush eagerly from all directions,
earrings jangling under the copper moon, as they abandon
cows and cooking fires, infants and husbands, even lovers,
leaving cries and untended flames, threats and accusations,
their dress and hair in disarray, eager to feel his caress.

Each one convinced she alone will get to caress
the beautiful, long-haired Krishna,
until they meet his terrible accusations--em
“Go home right now, listen to my directions,
your families need you, the ones you truly love.
The night is full of ferocious creatures, abandon

this madness, think of those duties you abandoned--
please your husband, suckle your babes, caress
instead your aching parents, no matter how bad at love
they are. This is the only way to please Krishna.”
They are devastated by the unexpected directions
and shudder at his cruel accusations,

bewailing, Inconsolable, until one of them accuses
the beautiful god of abandoning
his own true nature, mouthing the directions
of some lesser god, of withholding his caresses
just to toy with them. “O Krishna,”
she cries out, “what kind of lover

seeing the vermillion powder on the breasts of his beloved
would not be moved, realizing his accusations
caused the teary kohl of her eyes to smear it. O Krishna,
for your sake we have sacrificed and abandoned
everything, is it too much to desire your caress
when all you do is gaze in another direction?”

So she begins to walk, crestfallen, in the direction
of her home, her deep and arousing love
dismissed, forced instead to caress
her own crossed arms. Will her accusations
make Krishna relent? Will he abandon
his cruelty? You who know the true nature of Krishna. 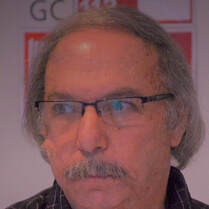 Leonard Kress has published poetry and fiction in Missouri Review, Massachusetts Review, Iowa Review, American Poetry Review, Harvard Review, etc. His recent collections are The Orpheus Complex, and Walk Like Bo Diddley. Living in the Candy Store and Other Poems and his new verse translation of the Polish Romantic epic, Pan Tadeusz by Adam Mickiewicz were both published in 2018. Craniotomy will appear this summer. He teaches philosophy and religion at Owens Community College in Ohio.