Let's leave the pliés and spinal curves and attitudes out of it,
unless they serve to keep our bodies warm. Cunningham said dance
“gives you nothing back…no paintings…no poems…nothing
but that single fleeting moment when you feel alive.”

I could feel the weight of my bones gather what was left
of the waxed floor and find in the fascia a quiet joyous potential,
alive to the impish capacity of our joints to do what we don’t expect
to our gratitude. Surprise yourself if you can at least once a week,

find a way to get from a to b without using your fore or hind limbs, or
from b to a using only your memories. Merce was waiting for me there
on the platform, the local had switched to express and told no one,

so I told him about the time I saw five dancers push at the limit
of what moving meant: one dancer giving up a backward curve
so generous her lambent head nearly emptied of logic.

The Serpentine walk we were led down led us to expect redemption
in the form of art. We got there and I lay down, defeated; you walked around.

People were enacting their ideas about being watched; they wanted to be;
you were weary because they kept telling you what to do—a flaw

you were in a room, sleeping, and there was light left in the day, and
twenty-some-odd people? Heads down, there was nothing left to perform

except the good will in that drawn space, which we attuned
through the white of our noise-canceling headphones​—​m 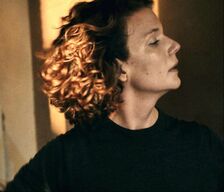 Kathleen Heil is a writer, choreographer, and translator. Her poems, stories, essays, and translations appear in The New Yorker, FENCE, Colorado Review, Two Lines, MAKE, Beloit Poetry Journal, The Threepenny Review, and many other journals. A recipient of fellowships and awards from the National Endowment for the Arts and the Robert Rauschenberg Foundation, among others, she lives and works in Berlin. More at kathleenheil.net and on Instagram @kathleen_heil.