In the gravel was planted some grass
in sprigs. Sort of Garamond, ornamental, it
rounded down. Among many variants
commonest he said. He liked having it
pointed out.

From Baja Barbara wrote the sitter to say
send me an image of my house. I forget
how much of me there is in it. Imagine
seeing over your phone into the blue
Pacific.

This brick, same as all six tangent
to it, is, like a dead tooth, nemesis.
Play with me. Pretend antipathy
and make ground against a tension too.

Picture upon the man a papoose
and in the papoose a daughter, now
grown, infant then. How late
this love for men, any one of them
passing.

The arc is gentle, horizon bowed only
a bit, for instance. Now, shower rain
therefrom, hot condensation back
in the bath. You are buoyant, scalded,
pelletted. Assumption all about you.

Plans for a ramada. A busted clumsy
storage door and netting. The sun
came out and earmarked the farther
barrel. None of this reminds me of
heterosexuality.

Which of These Alberts

The toss of dress is something by which to infer
a man stands there to catch and sort. A man
who knows the regalia well, who is met
sooner than the air conditioning
at his folding table, who has himself
worn the circle and stripe, number and strap
and goggle. A former albert
who will not shrink from the onrush of handsomes
makes like surrender however
the handover of silks and plunges them under suds.
The plug-faced heckuva and they exude what
compact alberts have across the years.
Not much on the bulletin board
of his face, but his notice is a certain sign.

We, most of us glassed in the sanctum,
remark impunities alberts have,
and to estimate is natural at the glass;
by remarks we make ourselves proportionate.
The toss is youth, surrender age.
An erstwhile albert is not available
for boot pull. Here we come in to squire.

Second nature when an albert mounts a stool
and stands a little in his seat, whose stockings report
the floor is spotless, a point of pride. When Albert
mounts a stool in his stockings either
to have himself groomed or to maneuver through
provided diversion, another
player stands behind and sympathizes
with his body, or off to the side. He, irreducible, too,
in his whites, sleeveless and easy: a fullness
in the carriage. At the inmost chamber
you have your work to do, and he his,
and the shaven cheek and the whites you wear
are albert and squire together work.

What does Albert need dampened and draped,
and where. What is fabric Albert wants his
fetlock bandaged by. Say your mentee says:
counsel’s standard clause. I doubt anyone’s
knees were more ruined than mine, back there
a claret blare away from recovering
my numbers. Albert, are you coming?

Ecco Homo on the courtesy billet, but
what he reads is magazines. Among men
an Adonais, and albert-trained, the albert takes
the downtime serious. At the monitors
he sells an interest in infield preparations,
a devotee however to his own
receding, retreat upstage, to castle king
and rook. In the rivalry we arrogate
we give the basket our albert shells and secure
to him accustomed squires. Break the yet.
The squire I emulate wraps his albert in
a service towel. I don’t know when
I’ve seen the sun. And then his own bare arm
idly withdraws its idle support of Albert’s
even jaw, a notice opportunity passed over,
and that’s my job, right up to tournament time,
to finish his round on double bended knee,
to read an albert billying, to count
him off and log it in, to work more
the note on methodology.

When things get bad enough I know
this rock, boulder, rather,
artificial, actually,
west side of a wash along
Aviation east of Swan.
The concrete shell at one end
is busted open and the rebar pried
wide enough for someone to enter
the rock headlong. Inside if
you clear the bottles and wadded
rags and shortstack cans of Pringles,
the cocoon sleeps two comfortably,
or one. When things get so bad
there’s one place past nowhere else
to go. Looks like a rock
with a ribcage, rusting. Length of
a man your stature. Get in. I know
you know. The worst is over. 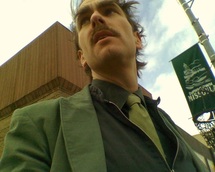 Brian Blanchfield is the author of two books of poetry, Not Even Then (University of California Press) and A Several World (Nightboat Books, forthcoming early 2014) and a chapbook, The History of Ideas: 1973-2012 (Spork Press). He lives in Tucson and can be visited there and here: http://brianblanchfield.com