that have been left to melt in the sun /

the pile of them not ringing /

—from head stock / to red-tongued clapper /

—all that fine sound in the curve of the lip / huffed

—dresses that have been thrown down in marriage to the rain /

—mud ribbons pouring out of sockets /

—pouring out of where the teeth are clean /

the fusion pressed out of it / 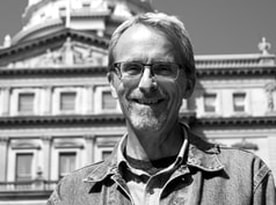 Dennis Hinrichsen was the winner of the 2014 Rachel Wetzsteon Chapbook Prize as well as the 2014 Michael Waters Poetry Prize from Southern Indiana University. Recent poems have appeared in Michigan Quarterly Review, Midwestern Gothic, and Muzzle. He also won the 2016 Poetry Prize from Third Coast. He lives in Lansing, Michigan where he is currently serving as the area’s first Poet Laureate.