His wife and child?

Himself.
His sole option.
The diseased earth is in the throes of dying.
Retreat or immersion.
No half-measures.
Retreat is illusory. Immersion is sacrifice.

Does his sacrifice bear fruit?

He lies with the good “witch,” devotee of Mother Mary.
He sets fire to his house.
He is forcibly restrained.
Transported to the institution where suffering is imposed.
Legislated torment.
But the war that would holocaust the diseased earth is nullified.
Time backs up.
Literally.
Temporary reprieve.

Does it matter that Alexander is a failed writer?

Not failed. Ceased to write.
The joy—where there is joy--is in the art-making.
If that dies nothing remains but retreat or sacrifice.

Sacrifice imitates Christ whether or not it is fruitful?
Didn’t Artaud, Sade, even Hitler, sacrifice in their own ways?

Not Hitler.
The other two--arguably.

Is the diseased earth irreparable?

You ask me or Tarkovsky?

Man and his institutions will not cease to filthy o’er the earth.
Profiting all the while.
The diseased earth can be cleansed solely by God’s grace.

Though not of animals, trees, humans.
Unless the sacrifice is willed, chosen.

Did the “chosen people” will their “sacrifice”?
Their holocaust?

I think of Mahler, Jew despite his baptism.
Mahler had the birds killed outside his dacha to claim the
silence he needed to compose Song of the Earth.
That was the rumor.

Why bring up Mahler?

He comes to me.

What happens if one’s sacrifice amounts to nothing?

It is the gesture that vibrates irrespective of results.
Even if the gesture costs your life.
But what if it costs the lives of others?
I think of John Brown’s raid on Harpers Ferry--two of his sons killed.
Brown hanged for treason.

Slavery has not been abolished. It is everywhere in numberless
guises.

It is the process not the result we are discussing.
Yours is a bleak view of the world.

Made world.
The world itself—what remains of it—is a blessing reviled.

I could have made my opportunity but hesitated.

I grieved from a safe distance.

You know about Pasolini’s homosexual relations with rough young
boys in the Rome ghettos.
Maybe you heard the odd story?
That he deliberately provoked the boys to beat and murder him so
that the debased photo with his face battered, trousers at his knees.
Sex exposed would testify to our squalid globe.
Presumably he envisioned it as a sacrificial, or better, shamanic act.
Weird story, but in Pasolini’s instance, not implausible.

I admire Pasolini however he choreographed his death—if that’s
what he did.

How does one distinguish narcissism from sacrifice?

They are often indistinguishable.

You are a writer sans frontiere.
Doesn’t your writing count?

As a species of sacrifice? 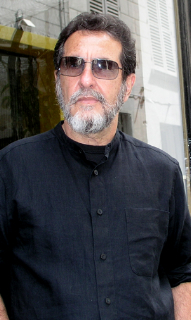