The reversible tie could be used for restraints.
Too often dates turned out to be escapees

was the ultimate bachelor's breakfast sidekick,
omelettes a la Robin he joked whenever he yolked.

Just above his right hip, a tiny Bat-hammock
swung, handy for his pal The Atom to explore

the differences between tiny and large dreams.
If only he could hide his nightmares in the empty

eye dropper that once discharged relief for the secret
map of red veins behind mask wings, his addiction

to post-patrol television marathons leaving his
vision blurred. Soon he would need another

six melatonin pills from his Joker-head Pez
dispenser and a deep swig from the Bat-flask.

Day falls and his other belt is a more convincing
alter ego. He notices there are more shadows

around the buckle, an extra hole punched deep
in the leather. Will anyone notice the fingerprint

powder he uses to camouflage his graying hair,
a dab here and there to touch up in the discos,

stalking on OK Cupid, which potential thieves
of an aging orphan’s heart? The smallest secret

He always felt more dangerous as Bruce Wayne,
the belt loops of his designer jeans able to withstand

ocean depths of financial pressure, the centrifugal
force of new Lamborghinis in a rainbow of colors.

pastures, and if it needs a monogrammed buckle
with a hidden hatch in case the spinning stops.

Nestled in the famous artist's attic notebooks
reside heroes who never escaped the launch
pad. Carbon Kid pokes his chiseled face out
from coffee stains, in diamond form, his oily

yet adamantine acne able to scrape through
the thickest fortress doors. Who would have
thought that a pencil with extra-soft lead
would shatter his aching crystalline heart?

Gravitas was far too into himself, bulky
costume buoyed by his ability to suit up
with skeins of bling floating in an energy
sphere around him. He was once booted

off the deck of an ocean liner by the sodden
thugs of Doctor Pisces, the weight of gold
chains and incarnate self-regard pulling him
down until his powers kicked in. Meanwhile,

his sidekick The Crier was drinking himself
and the cruise ship dry, his very presence
such a downer that they aimed for icebergs,
his psychotropic tears causing a polar bear

by the nefarious Duodog, twin-headed terror,
and the piratical Cat O’ Two Tails. Together,
their four-color exploits of evil made regular
housepets howl, snap, and hiss at their masters.

The unnerving cross-eyed hero Captain Zap
would take off his prescription bi-focal tinted
lenses and drill holes in villains and heroes,
twin beams crossing in front of his goatee

at random focal lengths, incinerating more
than one secret citadel by accident. Much
less dangerous was Dermus, his flaky skin
blankets propelled off his rotund backside,

the world's first nude villain, bilious archfoe
of Captain Day-O & His Bobsled Commandos.
Then there was the androgynous American Wonder,
whose vertical red- and white-striped fleece jumpsuit

concealed ambiguous bulges and utility pockets
filled with star-spangled mascara and mustache
wax, needle-tipped wangarangs and hysterical
ultrasonic hootaphones. No one could tolerate

the confusing battle cries filled with wonder
puns. The notebook’s final pages contained
rough plans for The Abandoned League’s HQ,
a neutral zone for both good and evil figures

to hang for pizzas and quasi-therapy sessions,
free from the ocean-depth pressures of popular
characters, able to swap allegiances and jokes,
the secret lair of unrealized redemption and glory.

One blue sun flickering its final message,
one mighty explosion destroying proud Xenon,
and then parsecs of unconsciousness, borne
in a chrysalis that burped when the lid closed.

On his voyage, Tupper-El learned the history
of Earth's plastic ones, their servitude in store
displays and water torture in refrigerator jugs,
the leviathan graveyard in the Sargasso Sea.

Who would bring swift justice to the cruel
meat wardens? Who would defend the rights
of moldable organic polymers, new brethren
on a strange world? His rubber heart pulsed

and he could see through the slave traders
except for those with plastic surgery, his only
weakness exposed as super models rubbed
themselves on him so that his enemies could

He fell for a news reporter more transparent
than human, and he grew content with a secret
identity as her purse, letting her cards of plastic
rattle inside of him, until the day his nemesis

Les Lucite manufactured a legion of heavy-duty
Tuppermaids, bizarre endless echoes of his love,
clear violations of mimetic genetic testing policies,
each infused with a shard of his destroyed planet

as a perfectly sculpted nose. His enemies pecked
and the Man of Plastic grew so weak that the sun
began to strip the precious CFCs from his noble
non-flesh. He had never considered his mortality,

the final biodegradability of the polystyrene soul.
The famous statue, hands on hips, unknowingly
held the frozen form of our extraterrestrial hero,
a landing spot for winged visitors looking to soar.

Why do we almost never see a Muslim hero in the comics?
Villains wear tall hats to compensate, even Galactus, in the comics.

Boys play with trucks and guns, girls play with dolls and pots.
Mutants of either sex play with Danger Rooms in the comics.

Gravity-defying breasts dangle over sunken rib cages like bazookas.
The deadliest, most time-consuming thing is falling in love with the comics.

Who has the spread-eagled sidekick? Who writhes in chains?
Something seeps beneath the forthright topsoil of the comics

Decades of do-goodery do not add wrinkles to Peter Parker.
Superheroes must have kick-ass plastic surgeons in the comics.

To walk the hero's journey, one must wipe the past clean.
Two dead parents are very nearly de rigeur in the comics.

What happens to women's skirts when gadgets and metallurgy mix?
Like in real life, rich guys with toys are rewarded in the comics.

Even their wisecracks are rendered all four colors of serious.
Bits of toilet paper never get stuck on their capes in the comics.

A hero dies. A hero is resurrected or reassembled or torn from time.
The fifth stage of grief is impossible to obtain in the comics. 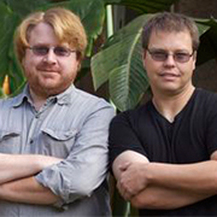 Martin Ott and John F. Buckley began their ongoing games of poetic volleyball in the spring of 2009. Since then, their collaborations have been accepted into more than seventy journals and anthologies, including Drawn to Marvel, Evergreen Review, Rabbit Ears, and ZYZZYVA, and gathered into two full-length collections on Brooklyn Arts Press, Poets’ Guide to America (2012) and the forthcoming Yankee Broadcast Network (2014). They are now writing poems for a third manuscript, American Wonder, about superheroes and supervillains.