FROM THE ROOM WITH THE RUBY windows I called for my sister to tell her I was going to America. I liked sitting there in the red light, chewing on my nails.

“I hate this room. It looks like a murder scene,” my sister said, standing in the doorway wearing all gold, from her tiara to her Gucci heels. This was very much like her, to be dressed like she was heading to Studio 54 even though it was mid-morning on a Tuesday and disco had been dead for generations.

She laid down next to me on the fainting couch and we looked up at the diamonds lodged into the ceiling in the shape of constellations. One great-grandfather or another had a passion for astronomy.

We were princesses from a small country. Our family was occasionally on TMZ, like when our brother was photographed naked in a Las Vegas penthouse with a bachelorette party from Ohio, or when our mother, after our father divorced her out of the royalty, punctuated her commonness by marrying her personal trainer. If you ignored international celebrity news, ours was the kind of country that you’d be surprised to learn even has a monarchy.

Our mountains are full of gems. Trip over a rock on a hike and you might overturn a sapphire the size of your fist. Bang an icepick into the right glacier and thousands of diamond fragments might come tumbling out and get caught in your hair like snowflakes. We are the richest country in the world. The New York Times travel section calls our people “exotically beautiful” and recommends our spelunking.

My sister was our radiant, beloved heir to the throne. If you grew up on Disney princesses it won’t strain your imagination to picture her doe eyes, tiny waist and flowing fairytale hair. She won a bronze medal in the Olympics for synchronized diving and had a business degree from Oxford. She was good at everything.

My brother was the middle child. He was the kind of handsome, ambitionless young man who righteously sparkled with the successes of his father as though they were his own. He charmed everyone, except his sisters and the women he had already slept with. His only responsibilities were to stay just on the sober side of embarrassingly drunk at state dinners and – for the love of God – to not get any socialites pregnant before he got married. He was having a great time.

I was the youngest. I gave dull nationalistic speeches at the university to undergraduate gemologists disappointed to see me instead of my sister. I went to christenings, sixtieth birthday parties and galas for third-world water charities where I explained the local origins of my elaborate jewelry to reporters.

Snorting cocaine off the tanks of golden toilets was getting boring. I couldn’t get a job. I couldn’t make any friends. I spent most of my time on the Internet where I learned that no cool girls in the rest of the world even aspired to jewels anymore.

I wanted nail art and hair extensions like a Real Housewife. I wanted to go to Coachella. I wanted an Apple Watch, more Instagram likes and a job at Twitter. I wanted to wear hoodies to work and watch TED Talks in my open-plan office.

In the ruby room I told my sister that I had already booked flights, gotten a visa and rented an apartment in San Francisco. I cried and wiped snot on my sleeve. I put my head on her shoulder. I asked her not to be disappointed with me for leaving our country.

“Once I had high tea at a fancy London hotel,” she said, running her fingers through my hair like I was a pet. “As the waiter pointed to the little sandwiches on a silver stand with his pinkie, explaining what they were, I noticed his hands were sweating. His hands were shaking so hard that my teacup rattled on its saucer as he placed it on the table.

“I was with some duchess. Her status was meant to impress me. She asked stilted questions about our GDP and eco-tourism and I answered politely, wondering if I should just send her our Wikipedia entry and save my breath. Then I noticed that she was wringing her hands. Her laugh was breathless and nervous. The duchess was just as intimidated of me as the waiter.”

I knew how they felt. In the ruby light her face was red and ferocious. “You think you’re going to America to work? Do you have any idea how hard it will be to make their hands sweat and shake? You will walk into a meeting with a man. He will hear your accent and say, ‘Are you from that country with the gems? I’ve always wanted to go there.’ You will smile and say what we taught you to say, ‘It’s the most beautiful country in the world.’ He will be nice to you and dismiss you. He’ll tell stories about you and what you were wearing at board meetings and on the golf course for the rest of his life.

“You are nothing to them. You are body parts. You are a throat to hold up diamond necklaces. You are the least important member of a royal family from a Game of Thrones subplot. They will laugh at you. You will Skype me in tears, begging me to come back home.”

​“I want to follow my dreams,” I said, already knowing I wouldn’t.

​She slapped me in the face. A jewel on the underside of her ring caught my skin and drew blood.

“Dreams are for Americans,” she said, and wiped the blood off of my cheek like a tear.


THAT WAS A LONG time ago. I never left.

Now my sister is the queen. My brother is still a playboy. I am their little sister.

I am nothing to them but body parts.​ 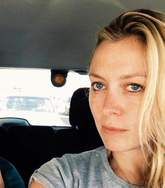 ﻿Kate Imbach is a writer living in Park City, Utah. You can find more of her work at kateimbach.com