4.       My shoes are not soft, but glitter. The ladies in the Presbyterian Thrift Store approved. Dress bright blue. Gold apples on gold chains swing from my ear lobes when I speak. A girl ironed my hair. C is late, having her hair curled at the foot of the mountain. Black eyelashes glued to her eyelashes, one by one. She picks me up at my condo, drives to the fancy restaurant on the lake. A rhino greets us, the mascot. I look into his eyes but they’re drawn on. Maybe slits were cut in the rhino’s face, or his eyes are in his always open mouth. Inside the Lone Rhinoceros room, C leads the way to the bar.

5.         I’m easily suspicious. Ever since the sailor at a picnic in Spain asked me out when I was sixteen.  I feel sixteen, alone again in a new place.

6.         A colleague, B, tells me about the oldest tree in the world, a bottlebrush or bottlepine, which makes me think of bottlenose dolphins, the photo I saw of our brains a similar size. The bottlenose I found on the deserted national seashore in Florida. Sometimes when a turtle died there, a ranger would come and spraypaint a red cross on its shell. Dead. But the dolphins were left to the turkey vultures. I’ve seen a sea bird stand guard over its own dead in protection. To stave off, or maybe, just goodbye goodbye. Hunched black wings of turkey vultures announce the dead on the beach. They hovered in twos over each body, like surgeons about to operate, conferring. When I’ve approached, they’ve sauntered in nervous circles, glancing over their shoulders. Afraid I’ll steal their meal: a giant tortoise, seagull whose ice-cube eyes have melted to black pinpricks, and a bottlenose dolphin so still, I think he must be gray driftwood from the hurricanes, a piece of boat or porch. But the vultures waited nearby on a caved-in roof. The tail folded like a newspaper, flukes calm as hands resting into one another. Beak a crumpled bottle, so I guessed the name, but what’s a name when something has opened your insides, pulled intestines into the sand, like wet laundry still in knots, dull pink, even the blowhole tired, dry, no more clouds. One vulture spread his wings to show me how big he is, how he and the others will cover the dolphin. But the chemical makeup of my body is indistinguishable from the ocean, so I stood beside. At night the sea came up, took him back.

7.         B said one man had convinced those in charge to let him cut sections from the oldest of the oldest trees. Not too far away, in an uninhabited place. Location of the trees kept secret. Cut, the tree died. B’s friend has been collecting photos of the tree from across time. His friend is almost ready to make a sculpture from the photos to resurrect the tree. But B said, He’s dying of leukemia. He speaks slowly, stopping himself from telling side stories. He tries to stay on track, but it seems a struggle. He seems to have a lot he’d like to tell me, or maybe not tell me, but tell someone.

8.         I’m suspicious of the oldest tree story. I research The Oldest Tree, which I think B may have actually called The Oldest Living Thing. And here it is: the bristlecone tree, 4,841 years old. It has a name: Methuselah, “the oldest non-clonal organism on earth.” “Located in the White Mountains of California in Inyo National Forest.” Its exact location is kept a close secret to protect it from the public. “An older specimen named Prometheus, which was more than 5,000 years old, was cut down by a U.S. Forest Service graduate student in 1964.” You can visit the grove where Methuselah grows, but they won’t tell you which tree it is. The Mother Nature Network shows a photo of a tree, asks, “Could this one be it?” Swirly, magical tree, like the trees at Green Lakes near Syracuse, place of the enchanted trees, the lake I’d thought to drown in. The spring of 2002 which felt like winter.

11.       B’s van was a Volkswagon converted to a Subaru, at least it said Subaru on the back. Tires so high I had to grab a handhold from inside the door, pull myself up to sit on the tire rim, then hoist myself up into the seat. I didn’t mind. Though it was twenty degrees outside, and my nylons, glimmer shoes were for other weather. The cold in the van metallic, just over the edge of bearable. You could live in this van, a stove behind me, bed back there somewhere.

12.       Earlier, I’d been staring at our colleague across the table, as if drunk, drawn to his light-hair, lightweightedness. I forgot he was real and could see me. Toward the end of the night, he appeared in a chair to my left, B to my right. Asked if I’d like to go to the bar afterwards.

14.       In the van, B said. If I get distracted, or if I’m talking to someone, doing something, and you want to leave, just tell me. I can take you home whenever you want to go.

15.       We’re surrounded by very tall trees like hundreds of cathedrals. I don’t know where I am, B said.  Really lost. And he’s lived here 17 years. Or taught here, living down the mountain.

16.       At the bar, I ordered water and realized I’d brought no money. My mouth felt stuck, as if I’d been out in the cold a long time, much colder than this. Cold enough to freeze my mouth.

17.       A girl danced by herself, in graceful, closed-eyes, sliding. Another girl touched my bright blue knee as I sat on a barstool watching B play pool. Pretty, she said. I wish I could wear a pretty dress.

18.       Why don’t you? I asked, but she was too far away by then. One of the art professors invited me to play blow-job shuffleboard. Blow the puck across the salty board.

19.      The light-haired man asked me to play “hit-the-ceiling-first-with-the-ping-pong-ball,” and “around-the-world-ping-pong.”  It took five people running around the table together to keep the ball in motion. My shoes unstable.

23.       One woman kept slapping her ass with her hand in time to the music. A foot or two away from her, I felt like a piece of a boat. 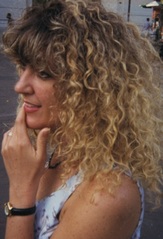 Kelle Groom is the author of a memoir, I Wore the Ocean in the Shape of a Girl (Simon & Schuster), a Barnes & Noble Discover selection, New York Times Book Review Editor's Choice, and a Library Journal Best Memoir. An NEA Fellow in Prose, her work has appeared in AGNI, American Poetry Review, Best American Poetry, The New Yorker, New York Times, and Ploughshares. She is MFA faculty at Sierra Nevada College, Lake Tahoe, and Director of the Summer Workshops at the Fine Arts Work Center in Provincetown.