That night I met the actress at the tavern where I been drinking glass after glass, the whole time imagining my young daughter home alone, wondering where I was. It was the most desperate redneck bar on earth, where you started straight away with an obvious pick-up line, and no matter how many times it had been tried before, it always worked. In our bar, you could put your watch on your dick and say “Let me check the time” and get a laugh, and get laid.

My wife was working late at the lab, and when the cops later told me how they had reconstructed her last movements around the place, it was the first time I had ever imagined her when she was away from me, alone, an independent person. Archie and Calvin came up to the bar looking disheveled and sweaty, saying that there was a serial killer on the loose, and that it was someone we knew. When Angie came in, she took my mind off of the serial killer, my daughter, my wife and the guys. She had rape fantasies, I had cuckold fantasies, and we had found a way to accommodate the both of us.

Archie offered to drive the four of us over to Angie’s place for a nightcap, but he had no car, no license, and no left arm. By the time we stumbled out to the girl’s car, we were the seediest people on earth, proud of it, and only waiting to see which one of us would end up bleeding first. Everyone knew Calvin had a gun on him and that to keep him from taking control we needed him in the front seat, but he jumped in the back while saying to me, “You got shotgun.” On the drive to the apartment we hit a possum and couldn’t stop laughing. I can still see Calvin in the headlights of the car, whacking the critter we had hit with a crowbar to finish him off, the iron bar stuck in the wretched body of the thing, Calvin lifting it off the ground with each thrash, blood dotting his flannel shirt.

The electric blue lights of the police car in the dark night announced that we were guilty until proven innocent; they blamed, they accused, they damned. We all had things to hide, so we ran. Later that night, at Angie’s place, the sex broke out suddenly, like a fight, like the fight we had had right there, the night before.

Angie’s dog used to ram his head against her bedroom door when we made love, and some nights – good nights – he did it so much he passed out. We got high, and just before the phone rang I said, “Life never comes to a head, despite it all.” When I got out of bed and told her I had to go, something to do with the cops, she told me she had decided to return to her wife and husband.

In the cab on the way over I thought about many things, starting with my brother, the attempted armed robber, hiding out deep amongst his friends in the Mormon community. I sat with the seatbelt off remembering my psych professor who unzipped and took it out in class, saying, “It’s the Availability Error which makes us remember the first impression more than anything after it.” The car dove through the tunnels, and I heard my grandmother with the withered arm saying, “Weakness is what tempts fate, sonny, and you’re one weak little bastard.” At the last red light I remembered the estate where there was a baby’s arm in a jar filled with formaldehyde; it was two hundred years old, it was for sale, I had the cash, and June’s birthday was the following week.

There were baby shoes for sale, never used, but that turned out only to be a strange joke by a sad old man.

My mother had pits on her face due to her anxiety, the pits fueling greater anxiety and more pits, and the irony of it made her laugh and laugh, but still she could not free herself, nor stop laughing.

For years I contemplated chopping off a finger, to make the inevitable horrible thing happen to me, but I was afraid it wouldn’t count.

My father the publisher was once again stopped dead in his tracks, grabbed by the first one in the door who screamed, “You just couldn’t wait, could you?”

My grandfather the soldier sat on his bunk and clipped his toenails in the morning saying that they would have further to grow after his death in the afternoon.

I was beaten as a child, and when I describe it to people, there is always that odd mix of ordinary details of a house, of people – the antiques in the den, the squeaky black leather chair, the octagonal clock over the kitchen table, the screen door slam, the denim jacket – because things happen here on earth, and not in some special place for atrocities.

The kid down the street, who sat on his lawn and made cars pull over to the side with his perfect imitation of ambulance sirens, was abused like me, just like me, but we were never friends, we never spoke.

At the morgue, I remembered my young daughter, home alone, wondering where I was, and I said to the clerk leading me down, “Life just ain’t like this.”

Later, when I was made a suspect, I could feel untruth constricting around me, I delivered my alibi like a lie, and it dawned on me that all the shortcuts I had taken in life made it impossible for me to understand, to defend myself against fate, to challenge anyone with the truth.

Let’s face it: my wife’s murder, my relationship with the porn star, her masochistic dog, the boneless human body, the rash publisher, the dead soldier with neat toenails, the ordinary beatings, the gasping possum, handguns and shotguns and of course the cops, the cops, the cops: it was all just a big distraction; somebody else had something much better, a little subtlety, some meaning, a truly promising beginning, something worth waiting for, some message written with the larger collection of life’s building blocks, so many of them rare, or overlooked, or so common their sound is never truly heard – we knew that, we really did, but we fell for it all anyway. 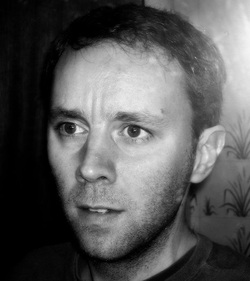 Patrick Cole lives in Barcelona. His fiction appeared recently in the Writing That Risks anthology and The Conium Review. His work has been nominated for Pushcart Prizes and has appeared in numerous other journals.