​The nurse brought lunch and a heated blanket to warm the woman’s body, holding the door open for the small girl who slipped in behind.

“What?” Her daughter blinked.

The nurse walked out and closed the door.

“You’re not going to melt,” her mother said. “You’re just not. So don’t even worry.”

“It’s not possible, okay?” She insisted. “It just can’t happen.”

The mother folded her hand in half, tucking it under her thin body beneath the cotton blanket. “Is it chilly in here?”

The daughter shook her head, no. She looked around for another blanket, then noticed the lunch tray beside the bed. “Have you eaten?” she asked. “You should eat.”

The woman didn’t acknowledge this comment, but continued her own conversation. “It’s not possible for you to be anything less than beautiful.” She looked her daughter in the eyes.

“And skinny. You will always be the right size. I don’t care what anyone says,” she held up a pointed finger on the end of a bony wrist. “Don’t listen.”

The girl rocked from heel to toe, back and forth, like the soles of her feet were on water. “You need to eat your lunch,” she said.

Her mother didn’t seem to hear. “They will look at you and look at you like you are too big. You will feel ugly and greasy and gross, like a thick chunk of everything awful in the world. So awful that they will scare you into starving yourself. But don’t let them.”

The girl nodded. She lifted the lid covering the plate, pushing it closer to the bed.

“You promise me?” Her mother’s voice sharpened.

“I mean really. Promise me.”

“They say it’s a little problem with my heart,” her voice resumed its regular rhythm and cadence, and the girl continued rocking. “But only a little problem. That can’t be too bad.”

The daughter didn’t answer. She remembered the last time her mother had a “little problem” with her heart, about a year ago, when the hospital became her home and she was left alone with her father, who couldn’t take it anymore and left, running from rising medical bills, saying he had more than his fill of her mess, saying that she was more mess than he could clean.

The girl sighed, shifting from heel to toe in time with the steady beep on the machine above her mother’s head, letting her eyes glaze over the bag of fluid attached by needle to her arm, the bag dripping tiny drops down the tube, into her small body.

“Hearts are designed to have problems.” She laughed an empty laugh. “And everyone has problems. Ask your father, if you ever talk to him again.” She sighed. “Love problems. Cardiac problems. Every problem. Everyone.”

The girl’s eyes glazed and glossed and blurred so much that, even as she stared, she could barely see the small lump under the covers.

“Some have more problems than others. My heart’s just a little off. Slight arrhythmia. And that’s what happens. We get out of sync with ourselves every now and then.”

Her mother kept talking, but the daughter could hardly hear. She could hardly hear the sour words slipping from the skeleton-head lying limp on the pillow. The girl’s eyes blurred and blended the soft colors of the cotton blanket with her mother’s pale tepid skin until the two forms shrunk together, slipping like sugar mixed in milk in tea, like water going down the drain, lessening, losing, until there was just a little bit left. The daughter was losing, losing, until she was lost.

The nurse returned an hour later to bring another blanket and saw the girl standing, still, beside her sleeping mother. She was in the same place as before, but something, the nurse noticed, seemed different. The girl looked almost as if she had grown a few inches taller, as if her presence were somehow slightly bigger. The cover on the lunch tray was overturned, and the plate was empty. 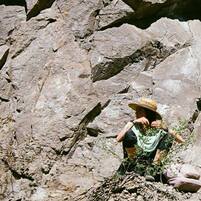 Rebecca Hannigan is a staff reviewer for Into the Void and a junior editor for F(r)iction. Her work is forthcoming in The Rumpus and can be found in Juked, Wigleaf, Queen Mob's Teahouse, and elsewhere. She lives in Denver, Colorado.