But when I flew to the moon
it was in a silver Studebaker
the steering wheel like Jupiter’s ring
as round as any planet comet streak
constellations dials and gauges
spun so fast it was like standing still
stars whirled past the windshield
I wasn’t looking when I saw such things
the sounds I made I cannot make now
I have forgotten how which is why I think
the moon never gets closer than it did then
I knelt on the front seat holding on
to the steering wheel. And flew.


The moon drew a veil across its face.

I put on my moon-watching socks.

The moon seeking dream peered with one eye, a squint of light.

The moon’s memory wiped away.

How like the ancients to howl and be heard, to see Orion’s belt and
one red star.

To wait for the end, to believe in beginnings, to see that nothing
stands still.

And the moon turned red, charred red, and you said it had been
400 years.

To lie on our backs wide open and wait; there is no satisfaction.

I wanted to call everyone; I called to no one but the moon.

And the back door opened and closed.

I felt midnight pass, and the shortest day passed.

And in the moon’s dream Walt Whitman, wearing his finest suit,
​tipped his hat. 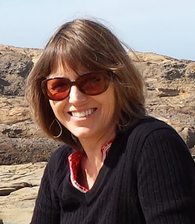 Sally Ashton is the author of three collections, most recently Some Odd Afternoon (BlazeVOX 2010). She is editor of DMQ Review, an online journal featuring poetry and art since 1998, and teaches at San José State University.