Hello. I possess some liquid.

Yes. I can see that. And in a glass, too. What will they think of next?

Er. You were supposed to ask me about my dress. Maybe something about the spangles per square inch, and the implications, thermodynamically speaking. That sort of thing.

I'm supposed to sort my things?

Hah. You're cute. You know, a rhetorical question is best explained in a broom closet.

I can see that. Because of the solvents. Not as much of a problem.

Yes. The closets here are extremely large. Solemn. I ate my Frisian omelet from brunch in one of them.

Are you from Chapter 12?

Darling, that question is unasked. Are you looking for someone? Maybe I can help you find them.

Oh. No. No one can help a someone. They must resist the systolic on their own.

You should drink up, hon. You're swinging wide around morbid... What is that exactly?

It's a Sartor Resartus. On ice.

It's reversible. Yummy. Try some!

Isn't it… just. Tastes like a mechanic's loan application.

Truly, who are you? Did you come with someone?

Oh, yes. Miss Anaphora. I have my nuance suit and my legible social registry and I am told that I must pace myself so as not to puke on the 14th green even though colors are not important to me.

Sound advice. Ish. You talk like someone who was raised in a library fire.

No. That is not correct. It was the plants in the Abcedarium. Bowling also helped.

That's very... interesting. I don't know if you've come to the right place, but I think you should take this parenthesis. Remember to hold it up here, so that it protects the person on your right. Yes. Like that. See, everything is wide open now. Exposed. Off you go.


Once he blithely walks
through the glass
of the sliding door,

it's only a matter of time.
His relatives take a deep
breath and triangulate

in the den, arranging
themselves in varying
lengths. The master

of ceremonies clears
this throat, absolutely
fluorescent with glee.

Nix, I think everyone
knows what’s going on.
All of our time hiding

in the shower was
not wasted. I mean,
we're talking large

of its own accord.
He sways, and grabs
the mantle for support.

Thanks for coming.
I'm touched. I see
that you've blocked

the exits, so really...
it's all about choice.
I’ll pack up this

liquidity in a go-cup,
but first, I'll just spend
a little time

over here sobbing
in public by the fire,
as is customary.


Nix tries to invite the Reader to an Anonymous Meeting


The lights are turned down surprisingly low.
I tend to bring bundt cake--

everyone else,
cream of ostrich casserole.

We may need a moment or two
in the den

during family dinners,
but we will feed many.

Everyone says the collective unconscious
is cruel and should be regulated.

But I have never indoctrinated eggnog
with rubbing alcohol,

nor made my gym teacher come
reluctantly under the parallel bars.

I haven’t ever gone to buy battery cables,
and had the clerk

throw himself across the rack of jerky,
babbling that he slept with his sister

and it made him shiny.
All these details induct you

into a nervous circle filled
with encrypted flannel and stimulants.

Unless you’re numb
through no fault of my own.

Unless you require something Germanic
just to get out of bed,

something meaty and labial.
I’ve been there.

I’ve forgotten to wipe the suffix
off my chin

before answering the door,
and stumbled into holidays

reeking of dialect.
Your abode is probably

just as weird as mine:
centered around a collection

of Nazi toothpicks and 43
half-empty bottles of Eau de Mesopotamia.

But I can hear you out there,
being kindly and suspicious:

These inventions don’t make you all
sexy, do they? You feel bad, right?

I can’t be sure. I’m sorry I was made
with this talent for transposition.

For being the reticent one
in the fedora and bustle,

with an odor of lightly abused lilies
and homonyms.

Everyone deserves
a someone who is not me. 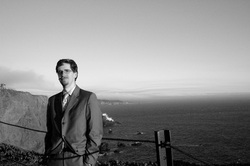 Simeon Berry lives in Somerville, Massachusetts. Recent work appears in Hotel Amerika, Western Humanities Review, Gulf Coast, and American Letters & Commentary. In 2013, his manuscript, Ampersand Revisited, was selected by Ariana Reines for The National Poetry Series, and will be forthcoming from Fence Books.