A late night arrival in Elko, Nevada means no vacancy except in cheap dives like the Louis Motel on the far west end of town. At night, Elko seems rather joyless, even though the billboards on the approach to town promise good times in the form of casinos, brothels, and bars. The point is underscored by a song playing in the Horseshoe Club: “You’re supposed to be feeling good…”. But in the town’s joyspots, there’s no evidence of good feelings, not on this night. Tonight, Elko is ground zero in a vast dislocated landscape, the place Emerson called “unapproachable America.”

The bars are hazy and rank, with a lineup of men drinking hard and quick, their loud talk lapsing into expressions of resignation: Yeah, but what you gonna do? That’s the way it always goes. Same old, same old. Around the corner, a gun shop sells “tactical survival” supplies. Just down the street, neon signs flicker in the desert night: the town’s three brothels all in a row. Ghost-like in the glow, patrons pass in and out of a shabby door with squealing hinges. In the casinos, people play fast, pumping in money, mesmerized by slot machines or the numbers flashing on the keno board.


In the light of day, Elko tries to strike an upbeat note. After all, it’s the home of LeeAnne’s Floral Design, Haley’s Fine Gifts, the Miss Elko Scholarship Foundation, and a storefront Wedding Chapel. And there’s a bargain breakfast in the coffee shop of the Commercial Casino, two eggs any style, toast, and your choice of sausage or bacon. A cup of coffee and things look a little brighter.

But for all that, it’s not long before Elko’s medley shifts to the minor key, the downbeat. Two elderly folks in a booth are discussing their gambling successes and failures loud enough for all to hear. She’s losing heavily, it seems, and he says, “I told you, stop drawing to fill straights—it ain’t gonna happen. Play for three of a kind and pairs and you might—repeat, might—come out ahead.”

The waitresses, meanwhile, carry on their own conversation. “Feels like 11:30,” one says. “Wish it was,” her partner answers. Then some gossip: “You see that guy in here about six? Drunk and dropping money all over the floor? Thought he’d pass out right in his omelet.”

In Elko, cigarette smoke and prosthetics are prevalent. People are not healthy. Everyone in the coffee shop is smoking, except for the guy wheeling around an oxygen tank, plastic tubes hooked to his nose. Another woman has a tube stuck in her throat. There are people with back braces, walkers, canes. Almost everyone looks decrepit; even guys in their twenties and thirties talk in old and weary voices. Or is it just that it’s morning in a casino and what do you expect?

A trucker type comes in, takes a stool at the far end next to another trucker. The newcomer is a little too neat compared to most drivers—glasses, pressed jeans, shiny boots—and what’s more he’s a regular chatterbox. Goes on and on about the trucking business, tossing out buzzwords and trade talk: burning oil, liability, off-loading, air cylinders, hydraulic cylinders. His grittier and more taciturn interlocutor nods, blows cigarette smoke, and grimaces when the stranger pulls out a catalog of trucking supplies: another goddam salesman.

The question is directed to a young man with a faraway look. He chews his toast slowly, takes his time answering. “Not a player,” he says, finally.

Across the coffee shop, a man gets up from a booth and says to his partners, “I lost it all, now I got to go back and start all over again.” They all laugh, another instance of the weird joviality about losing that predominates in these casino towns. People seem to regard their losses as inevitable, part of the fun they’re supposed to be having.

A new arrival now engages the waitress. “Thought you’d be long gone from this place by now.”

“Me, too. I keep trying to leave this place and I can’t seem to make my break.”

“Yeah, they keep me hanging around. Just to see what I’ll do next, I guess.”

Time to move on. At the edge of town, Old Highway 40 seems to disappear into heat mirage and a vast searing sky. You’re gaining speed, lifting off the cracked and ridged macadam—and it’s like you’re flying, flying into the great wide open and still not getting anywhere. 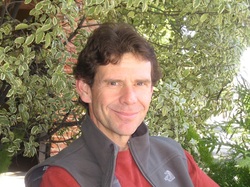 Along with two books of travel essays--Guatemalan Journey (University of Texas Press) and Green Dreams: Travels in Central America (Lonely Planet)--Stephen Benz has published essays in Creative Nonfiction, River Teeth, TriQuarterly, and other journals. One of his essays was selected for Best American Travel Writing, 2003. Formerly a writer for Tropic, the Sunday magazine of the Miami Herald, he now teaches professional writing at the University of New Mexico.