​For countless nights, the empty desert burned away its glare, each sand-grain like a starburst winking out. Then, called forth form unknown zodiacs, hordes suddenly converged one evening, pilgrims attracted like vast ionic chains as if by the moon-tide’s pull on blood. These wayfarers lined a midway with a rollercoaster, a Whirly-Gig, a Ferris wheel; a vast hall of mirrors; a sea of tents popped up, pylons and towers; a stage banged together from odd boards and joists. A dizzy rhythm mesmerized the earth, reverberations that seemed to amplify the electric currents underneath their flesh. These nomads obeyed their own laws, formed an impromptu commonwealth with the grace of intuition, these naked fire-eaters and dervishes, women with cat’s eyes and goat horns, wastrels and wizards, cyborgs, and Siamese twins. Seen from the surrounding dunes, the city glowed with the aura these creatures emitted from their very skins: a bowl of molten light—a volcanic cone. Perhaps the orgies forged such conflagrations. Perhaps the frenzied mob demanded a virgin to be sacrificed. They drank and sang and wrote out sacred hieroglyphs on the desert floor that the winds evangelized. And then one afternoon, some tipping point was reached each instinctively had recognized; all the creatures packed up and dispersed. But they knew themselves, each one, to be eternal citizens of this fiery conurbation, obeying its secret rites in the diaspora until the astral signs, some faint glitch out of the heavens, would send them back again to rebuild their vanishing city, their great memorial to transience.

The last daylight clung to regret like a demagogue to his teleprompter. Sure, the aeronauts reshaped the clouds, the mail carriers smudged our postcards, and the fourth estate redacted the record per usual. The lovers botanizing, the rest of us squatting on our milk-crates Sunday afternoons making up stories for the police. Is it worth remarking that the children tore the pages from their books? The litter’s still whirling like a roomful of moths.

​We discovered a mouse in the wall. Not a mouse, really, but a little hole that we assumed belonged to a mouse, perhaps a whole family of mice. To think, a family lived right beside us in the lining of our walls, between one room and the next, in the interstices of our existence! I believed I began hearing tiny scratching sounds, scurrying and nibbling. But maybe it was my imagination, maybe it was the neighbors next door, wind through the trees, traffic, or birds outside. I couldn’t be sure… Could the house have secret crevices like the empty vaults behind the bathroom medicine cabinet in old track homes where one would deposit used razorblades? Or, what if there were creatures that wedged between not the pink, forgotten linings of the walls, but rather one moment and the next—the blank spaces separating our instants of consciousness—and lived their whole lives within such an interregnum,  scroungers and hangers-on of the in-between? There might be whole families of rodents who make burrows in the wasted time between our having one thought and another, nesting there, sometimes peeping out the holes that riddle our logic. Or something sharp and glinting amid all that dust and drywall. A little scratching, yes, I hear it, I’m certain! But is it in the wall? Or on some wheel inside my head? A rickety ticking, ticking, ticking going round! There it is again! –But where’s it coming from? 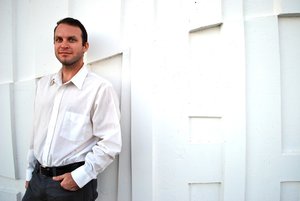 Will Cordeiro has work appearing or forthcoming in Copper Nickel, Crab Orchard Review, DIAGRAM, Fourteen Hills, New Madrid, Phoebe, Valparaiso Poetry Review, Whiskey Island, and elsewhere. He is grateful for a scholarship from Sewanee Writers’ Conference and a Truman Capote Writer’s Fellowship as well as residencies from ART 342, Blue Mountain Center, Ora Lerman Trust, Petrified Forest National Park, and Risley Residential College. He received his MFA and Ph.D. from Cornell University. He lives in Flagstaff, where he teaches in the Honors Program at Northern Arizona University.